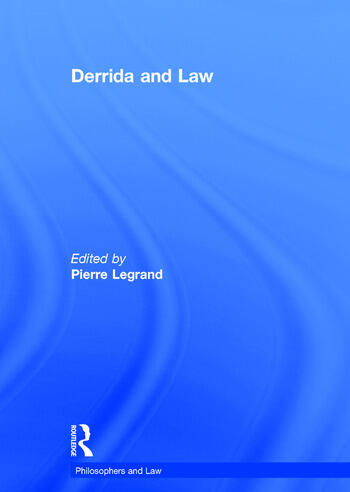 This volume gathers together sixteen seminal articles, all written by leading scholars, which articulate and effectuate the influence of Derrida's scholarship on the field of law. The articles included in this collection are underpinned by the authors' shared belief that the intellectual challenges posed by Derrida's work to legal scholarship are as challenging as they are pressing and as profound as they are inescapable. In addition to a thorough introduction addressing salient aspects of Jacques Derrida's engagement with law, this book comes with an extensive bibliography of sources in English. This provides the reader with a carefully selected list of more than one hundred texts, all of which serve as introductory pathways to Derrida's philosophy and in particular to the interaction between Derrida and law. A fine reminder of the trans-disciplinary influence of Jacques Derrida's thought, this landmark collection is destined to generate substantial interest in philosophy departments and law schools alike.

Contents: Introduction; Part I Accounts at Deconstruction's Edge: From the trace to the law: Derridean politics, Leonard Lawlor; Why deconstruction is beneficial, Ben Mathews; Derrida on law: or, poststructuralism gets serious, John P. McCormick; Derrida and law: legitimate fictions, Margaret Davies; 'Deconstruction is justice', Elisabeth Weber. Part II Testimonials on Legal Hauntology: The economy of violence: Derrida on law and justice, Roberto Buonamano; The jurisprudence of the 'force of law', Petra Gehring; 'Le hors de texte, c'est moi': the politics of form and the domestication of deconstruction, Pierre Schlag; The ideality of difference: toward objectivity in legal interpretation, Alan Brudner. Part III Openings in Academic Discursivity: Europe in America: grammatology, legal studies, and the politics of transmission, Peter Goodrich; Deconstructive practice and legal theory, J.M. Balkin; On the deconstruction of jurisprudence: 'Fin(n)is Philosophiae', Costas Douzinas and Ronnie Warrington; Paradoxically, Derrida: for a comparative legal studies, Pierre Legrand. Part IV Actualities of Deconstruction's Presence: Economics of gift - positivity of justice: the mutual paranoia of Jacques Derrida and Niklas Luhmann, Gunther Teubner; Derrida's ethical turn and America: looking back from the crossroads of global terrorism and the enlightenment, Michel Rosenfeld; 'What are the gods to us now?': secular theology and the modernity of law, Peter Fitzpatrick. Name Index.