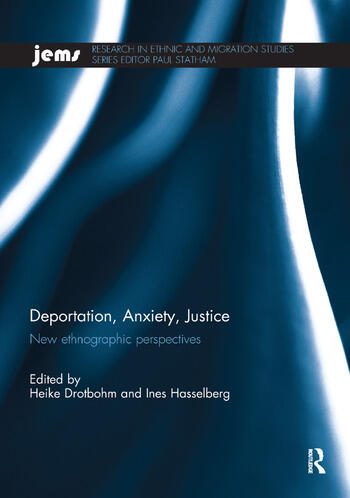 This book provides new ethnographic perspectives on the intersections between deportation, anxiety, and justice. As an instrument for controlling international migration, deportation policies may be justified by public authorities as measures responding to anxieties over (unregulated) migration. At the same time, they also bring out uncertainty and unrest to deportable and deported migrants as well as to their social and institutional environments, in which this act of the state may appear deeply unjust.

Providing new and complementary insights into what ‘deportation’ as a legal and policy measure actually embraces in social reality, this book argues for an understanding of deportation as a process that begins long before (and carries on long after) the removal from one country to another has taken place. It provides a transnational perspective over the ‘deportation corridor’, covering different places, sites, actors, and institutions. Most importantly, it reasserts the emotional and normative elements inherent to contemporary deportation policies and practices, emphasising the interplay between deportation, perceptions of justice, and national, institutional, and personal anxieties.

Written by leading experts in the field, the contributions cover a broad spectrum of geographical sites, deportation practices, and perspectives, bringing together a long overdue addition to the current scholarship on deportation studies. This book was originally published as a special issue of the Journal of Ethnic and Migration Studies.

1. Balancing Legitimacy, Exceptionality and Accountability: On Foreign-national Offenders’ Reluctance to Engage in Anti-deportation Campaigns in the UK Ines Hasselberg

2. The Jewish State of Anxiety: Between Moral Obligation and Fearism in the Treatment of African Asylum Seekers in Israel Barak Kalir

3. The Management of Anxiety: An Ethnographical Outlook on Self-mutilations in a French Immigration Detention Centre Nicolas Fischer

4. ‘We Deport Them but They Keep Coming Back’: The Normalcy of Deportation in the Daily Life of ‘Undocumented’ Zimbabwean Migrant Workers in Botswana Treasa M. Galvin

6. The Reversal of Migratory Family Lives: A Cape Verdean Perspective on Gender and Sociality pre- and post-deportation Heike Drotbohm

Heike Drotbohm is Professor for Social and Cultural Anthropology in the Department of Anthropology and African Studies at the University of Mainz, Germany.

is a postdoctoral research fellow at the Centre for Criminology, University of Oxford, UK. She is the author of Enduring Uncertainty. Deportation, Punishment and Everyday Life (2016).