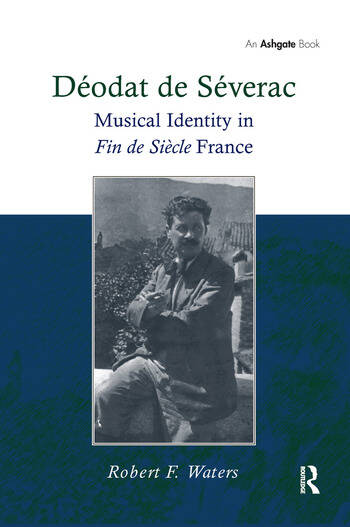 Déodat de Séverac (1872-1921) is best known for his piano music but his compositions included orchestral and vocal works, including opera, cantata and incidental music. Claude Debussy described Séverac's music as "exquisite and rich with ideas." The early works were influenced by Impressionist harmonies, church modes, cyclic techniques, folk-like melodies and Andalusian motives. Séverac's style changed dramatically in 1907 when he left Paris and began to include Catalan elements in his compositions - a transition that has hitherto gone unrecognized. Robert Waters provides a much-needed study of the life and works of Séverac, focusing on the composer's regionalist philosophy. Séverac's engagement with folk music was not a patriotic gesture in the vein of nationalistic composers, but a way of expressing regional identity within France to counter the restrictive styles sanctioned by the Paris Conservatory. His musical philosophy mirrored larger social and political debates regarding anti-centralist positions on education, politics, art and culture in fin de siècle France. Such debates involved political and social leaders whom Séverac knew and personally admired, including the writer Maurice Barrès and the poet Frédéric Mistral. The book will appeal to those specializing in French music, European ethnic musics, piano music and French music history.

Robert F. Waters is Assistant Professor of Music History at Seton Hall University in South Orange, New Jersey, just outside of New York City. As a musicologist, he did editorial work on the French text of music criticism written by Hector Berlioz, a project undertaken by the Center for Studies in Nineteenth-Century Music in collaboration with the Paris Conservatoire. Published articles include "Emulation and Influence: Japonisme and Western Music in fin de siècle Paris" for the British journal The Music Review. He has lectured and presented papers in Australia, Greece, England, and throughout the United States. As a journalist, Waters was a contributing music writer for the Washington Post for ten years, and as a former pianist, Waters studied with Santiago Rodriguez, Thomas Schumacher, and Daniel Ericourt.

’The research presented in this book is both considerable and impressive.’ Notes '... a complete guide to Séverac's music...' Catalan Journal of Communication & Cultural Studies