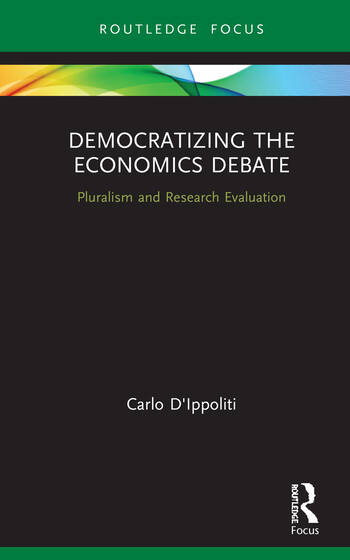 More than a decade since the global financial crisis, economics does not exhibit signs of significant change. Mainstream economists act on an idealized image of science, which includes the convergence of all perspectives into a single supposed scientific truth. Democratizing the Economics Debate shows that this idealized image both provides an inadequate description of what science should be and misrepresents the recent past and current state of economics.

Economics has always been characterized by a plurality of competing perspectives and research paradigms, however there is evidence of a worrying global involution in the last forty years. Even as the production of economics publications has exploded, the economics debate is becoming less plural and increasingly more hierarchical. Among several causes, the tendency to conformism has been exacerbated in recent years with the use of formal schemes of research quality evaluation. This book documents how such schemes now cover more than half of all economists worldwide, and reviews the impact of biased methods of research evaluation on the stunting of levels of pluralism in economics.

The book will be of interest to anyone who worries for the state of the democratic debate. As experts who intervene in the public debate, economists must assure society that they are working in the best possible way, which includes fostering a wide and fair scientific debate. It is this test of social legitimacy that economics currently fails.

1. How economics should be

Experts wish to project unanimity
Is scientists’ authority legitimate?
Science from the crooked wood of humankind
Economists as human beings
How to regain trust

Economics has both grown and narrowed
Are there a mainstream and a heterodox economics?
Why mainstream pluralism is not enough
Is mainstream economics “neoliberal”?
Economics is too hierarchical

3. What economics could become

Carlo D’Ippoliti is associate professor of Political Economy at Sapienza University of Rome, Italy, and editor of PSL Quarterly Review. He is the author of Economics and Diversity (Routledge, 2011) and co-editor of The Routledge Handbook of Heterodox Economics (Routledge, 2017).