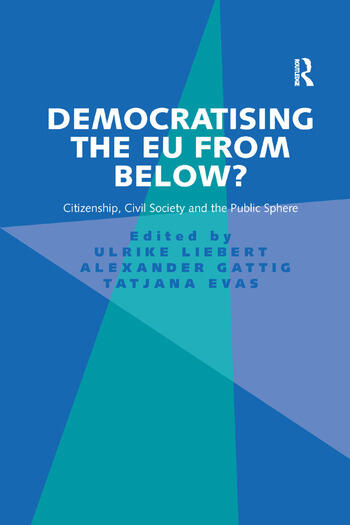 Democratising the EU from Below?: Citizenship, Civil Society and the Public Sphere

For the European Union of the 21st century, the search for sustainable prosperity and stability includes the challenge of reconciling democratic ideals and practices with the construction of a European constitutional order. From the 2001 Laeken Summit to the 2009 Lisbon Treaty and beyond EU leaders have repeatedly set out to bring citizens closer to EU governance by making it more democratic and effective yet several national ratification referendums have shown that publics are divided about whether and why to endorse or veto complex EU reform packages imposed from the top down. Despite these limitations people do effectively engage in the making of a European polity. By initiating national court proceedings active citizens are promoting fundamental European rights in Member States' practices. As party members they contribute to shaping mass media communication about, and national publics' understanding of, European political alternatives. As civil society activists citizens help build social networks for contesting certain EU reforms or advocating others. Last but not least, as voters in national and European elections they choose between competing party visions, and national parliamentary stances regarding the role of democratic citizenship. This original contribution to the debate about democratic citizenship vis-Ã -vis the challenges of economic globalization and European political integration presents critical explorations of different fields of direct, representative, participatory and deliberative democratic citizenship practices that affect the transformation of Europe.

Ulrike Liebert is Professor of Political Science, Jean Monnet Professor of European Politics, director of the Jean Monnet Centre for European Studies at Bremen University where she has co-directed the section ’European integration’ of the Bremen International Graduate School for Social Sciences. Alexander Gattig is a lecturer at the Department of Sociology’s Social Science Methods Centre at the University of Bremen. His research interests are in the area of social stratification, political sociology and rational choice theory. Tatjana Evas is an Associate Professor at the Tallinn Law School, Estonia and currently working as a researcher at the European University Institute. Her research interests are in the area of European constitutional law, judicial politics, legal theory and equality law.

'More Europe is the answer most frequently articulated by elites in response to the current crisis of the Euro. This "from above" strategy has served several times in the past to drive the integration process forward, but will it suffice in the present context? This collection of essays suggests not. The impact of EU policies has become so extensive and controversial that it has attracted increased media attention, penetrated organizations of civil society, compelled political parties to take conflicting positions and mobilized citizens to act in novel ways "from below" - and much of this has been against rather than for more Europe. Scholars and politicians interested not just in understanding this rise in resistance, but also in acting to incorporate it within a new strategy for legitimating the emerging Euro-polity will find important insights in this book.’ Philippe C. Schmitter, European University Institute, Italy ’By exploring how European citizens, civil society, the media, political parties, parliaments and courts engage with the problems of democracy in the EU, this book sheds new light on an inconclusive constitutional order. In the face of the present financial, economic and political crisis, the authors provide much appreciated knowledge of the more fundamental questions of EU’s viability as a citizens’ union�.’ Erik O. Eriksen, University of Oslo, Norway

Democratising the EU from Below?: Citizenship, Civil Society and the Public Sphere