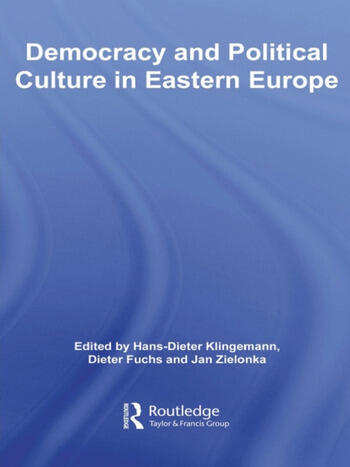 What is the relationship between democracy and political culture in countries undergoing major systemic change? Have subjective political orientations of citizens been important in shaping the development of democracy in central and eastern Europe after the fall of communism?

These core questions are tackled by an impressive range of twenty political scientists, sixteen of which are based in the central and eastern European countries covered in this essential new book. Their analyses draw on a unique set of data collected and processed by the contributors to this volume within the framework of the World Values Survey project. This data enables these authors to establish similarities and differences in support of democracy between a large number of countries with different cultural and structural conditions as well as historical legacies.

The macro-level findings of the book tend to support the proposition that support of democracy declines the further east one goes. In contrast, micro-level relationships have been found to be astonishingly similar. For example, support of democracy is always positively related to higher levels of education – no matter where an individual citizen happens to live. This new book builds a clear understanding of what makes democracies strong and resistant to autocratic temptation.

Chapter 1 Democratic Communities in Europe: A Comparison between East and West Dieter Fuchs and Hans-Dieter Klingemann

Dieter Fuchs is Professor of Political Science at the University of Stuttgart, Germany.