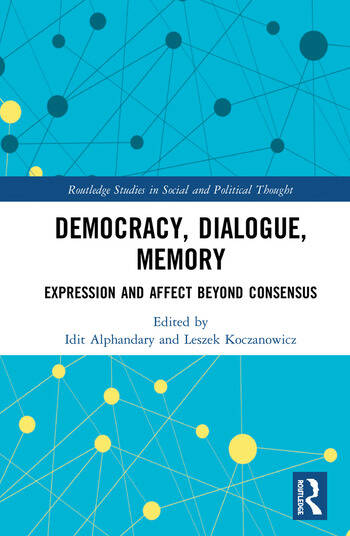 Arguing that the politics of democracy is inseparable from a notion of dialogue that emerges from conflicting and often traumatic memories, Democracy, Dialogue, Memory examines the importance of dialogue for the achievement of understanding in civil society rather than consensus, so that democratic participation and inclusion can be strengthened. With attention to the importance for marginalized communities of the ability to disclose fundamental ethnic, religious, gendered, racial, or personal and affective characteristics born of trauma, and so cease to represent "otherness," this book brings together studies from Europe, Israel and the United States of literary and visual attempts to expand dialogue with "the other," particularly where democracies are prone to vacillating between the desire to endorse otherness, and political dread of the other. A critique of the practices of forced inclusion and forced consensual negotiation, that seeks to advance dialogue as a crucial safeguard against the twin dangers of exclusion and enforced assimilation, Democracy, Dialogue, Memory will appeal to scholars with interests in political theory, political sociology, collective and contested memory and civil society at the same time as allowing scholars from the humanities and the arts to examine seminal chapters that pivot on psychoanalytical approaches to literature, film and philosophy at the borderline of political thinking.

Part One: Democracy and Memory at the Crossroads of Dialogue and Tolerance in Everyday Life

2. The Idea of Tolerance and Social Dialogue in the Democratic State: Remarks on Jacques Derrida’s and Jürgen Habermas’s views on the idea of tolerance in the modern liberal-democratic state (Paweł Dybel)

4. Radical Politics: "We, the People" or "we mortals" (Krzysztof Ziarek)

5. Dialogue as the Tool Enhancing the Effectiveness of NGO’s Activities in Modern Societies (Tomasz Grzyb, Katarzyna Byrka and Dariusz Dolinski)

Part Two: Art and Literature as Custodians of Traumatic Memory, Resistance and Forgiveness in Democracy

6. Community at the Table (Dorota Koczanowicz)

7. "The Thought from Outside Memory, Truth and the ‘Repetition of Faith’" (Ramona Fotiade)

Storytelling as the Modern Piece of Resistance (Agata Bielik-Robson)

9. Duras vs. Duras: Traumatic Memory and the Question of Deferred Retroaction (Eran Dorfman)

Idit Alphandary is Senior Lecturer in Comparative Literature and the Interdisciplinary Program of the Arts at Tel Aviv University, Israel, and the editor of Consciousness Between Crisis and Empowerment: Interdisciplinary Writing on Women and Gender (2017). She is the author of numerous essays and book chapters on literature, film and visual studies seen through psychoanalysis and philosophy at the crossroads of political thought.

is Professor of Philosophy and Political Science at Wroclaw Faculty of the University of Social Sciences and Humanities. He is the author and editor of twelve books and numerous articles in Polish and English, including Politics of Time: Dynamics of Identity in Post-Communist Poland; Politics of Dialogue: Non-Consensual Democracy and Critical Community; Discussing Modernity: A Dialogue with Martin Jay and Beauty, Responsibility, and Power: Ethical and Political Consequences of Pragmatist Aesthetics.