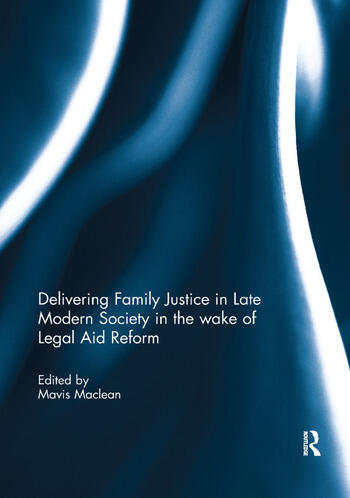 Legal aid for family cases in private law, mainly divorce and separation, where the state is not directly involved as it is in public law cases where there are issues of domestic violence or neglect or abuse of children, came to an abrupt end together with help for welfare and immigration cases on April 1 2013 when the Legal Aid Sentencing and Punishment of Offenders Act (LASPO) came into effect. This book presents an account of the wide ranging problems which the researchers and practitioners expected to ensue. Sadly, their fears have been realised in many areas of legal help and advice. The National Audit Office was to take the view in 2014 that although the Ministry of Justice had succeeded in making considerable savings in the cause of austerity that they had failed to investigate or understand the impact of these cuts on the individuals concerned and society as a whole. This book was previously published as a special issue of the Journal of Social Welfare and Family Law.

4. Changing the immigration rules and withdrawing the ‘currency’ of legal aid: the impact of LASPO 2012 on migrants and their families
F. Meyler and S. Woodhouse

5. The impact of cuts in legal aid funding on charities
Debra Morris and Warren Barr

6. Back for the future: a client centred analysis of social welfare and family law provision
Alexy Buck and Marisol Smith

7. Arbitration in financial dispute resolution: the final step to reconstructing the default(s) and exception(s)?
Lucinda Ferguson

8. When legal rights are not a reality: do individuals know their rights and how can we tell?
Catrina Denvir, Nigel J. Balmer and Pascoe Pleasence

Mavis Maclean has carried out empirical research in family justice for many years, and founded the Oxford Centre for Family Law and Policy with John Eekelaar in Oxford in 2001. She has worked as an academic adviser to the Ministry of Justice, and edits the JSWFL with Helen Stalford.