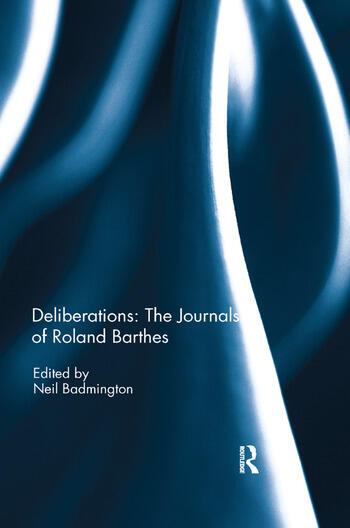 Deliberations: The Journals of Roland Barthes

‘I’ve never kept a journal’, Roland Barthes declared in 1979, ‘ – or, rather, I’ve never known if I should keep one’. The form itself, he continued, was inferior and ‘unnecessary’, a ‘minor mania of writing’. Barthes died months making this statement, and the years since then have revealed that he had actually been concealing a fondness for diary-writing. The publication in 1985 of Incidents brought to light an intimate journal entitled ‘Soirées de Paris’, while 2009 saw the appearance of two much longer diaries kept by Barthes following the death of his mother in 1977 and during a trip to China in 1974, respectively. Further journals lie in the archive, unpublished and largely unseen; it is not clear if these will ever enter the public domain.

This collection, which brings together some of the most prominent scholars in the field, considers the present implications of Roland Barthes’ journals. How do these diaries invite us to reconsider aspects of Barthes’ work which have become familiar through his reception as one of the twentieth century’s most influential literary and cultural critics? What do they allow us to see for the first time? What is their relation to the works whose appearance Barthes authorised during his lifetime? Where and how do they fit in his oeuvre? How do they relate to each other across moment and mood? Why might they call for deliberations? This book was originally published as a special issue of Textual Practice.

2. Barthes deliberates: Pascal, Ignatius and the question of the diary Diana Knight

3. Diary-writing and the return of Gide in Barthes’s ‘Vita Nova’ Sam Ferguson

4. Barthes and Antonioni in China: the muffling of criticism Lucy O’Meara

Neil Badmington is Professor of English Literature at Cardiff University.

Deliberations: The Journals of Roland Barthes