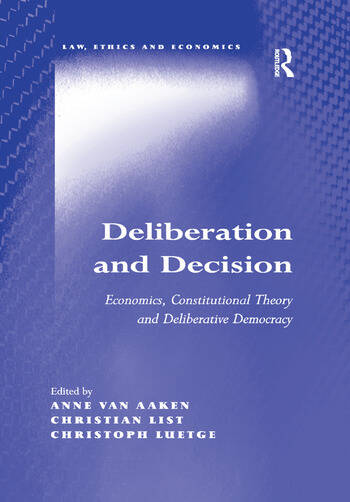 Deliberation and Decision explores ways of bridging the gap between two rival approaches to theorizing about democratic institutions: constitutional economics on the one hand and deliberative democracy on the other. The two approaches offer very different accounts of the functioning and legitimacy of democratic institutions. Although both highlight the importance of democratic consent, their accounts of such consent could hardly be more different. Constitutional economics models individuals as self-interested rational utility maximizers and uses economic efficiency criteria such as incentive compatibility for evaluating institutions. Deliberative democracy models individuals as communicating subjects capable of engaging in democratic discourse. The two approaches are disjointed not only in terms of their assumptions and methodology but also in terms of the communication - or lack thereof - between their respective communities of researchers. This book provides a comprehensive overview of the recent debate between the two approaches and makes new and original contributions to that debate.

Dr Anne van Aaken is a Research Fellow at the Max Planck Institute for Comparative Public Law and International Law in Heidelberg, Germany, Dr Christian List is a Lecturer for the Department of Government at LSE, London, UK and Dr Christoph Luetge is Assistant Professor at the Chair for Philosophy and Economics

'...offers a sound overview of the issues...and sets the interested researchers, political scientists as well as economists and philosophers, thinking.' Public Choice