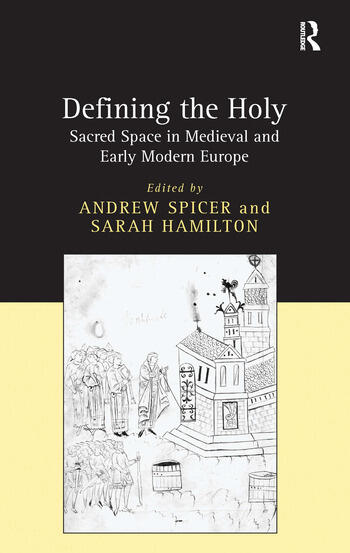 Holy sites, both public - churches, monasteries, shrines - and more private - domestic chapels, oratories - populated the landscape of medieval and early modern Europe, providing contemporaries with access to the divine. These sacred spaces thus defined religious experience, and were fundamental to both the geography and social history of Europe over the course of 1,000 years. But how were these sacred spaces, both public and private, defined? How were they created, used, recognised and transformed? And to what extent did these definitions change over the course of time, and in particular as a result of the changes wrought in the sixteenth and seventeenth centuries. Taking a strongly interdisciplinary approach, this volume tackles these questions from the point of view of archaeology, architectural and art history, liturgy, and history to consider the fundamental interaction between the sacred and the profane. Exploring the establishment of sacred space within both the public and domestic spheres, as well as the role of the secular within the sacred sphere, each chapter provides fascinating insights into how these concepts helped shape, and were shaped by, wider society. By highlighting these issues on a European basis from the medieval period through the age of the reformations, these essays demonstrate the significance of continuity as much as change in definitions of sacred space, and thus identify long term trends which have hitherto been absent in more limited studies. As such this volume provides essential reading for anyone with an interest in the ecclesiastical development of western Europe from the thirteenth to the eighteenth centuries.

Contents: Preface; Defining the holy: the delineation of sacred space, Sarah Hamilton and Andrew Spicer. Part I: Domestic space and devotion in the Middle Ages, Diana Webb; The domesticity of sacred space in the 15th-century Netherlands, Jeanne Nuechterlein; Private rooms in the monastic architecture of Habsburg Spain, Lisa A. Banner; Forbidden sacred spaces in Reformation England, Richard L. Williams; Designing for Protestant worship: the private chapels of the Cecil family, Annabel Ricketts with Claire Gapper and Caroline Knight. Part II: A northern Jerusalem: transforming the spatial geography of the convent of Wienhausen, June L. Mecham; Using material culture to define holy space: the Bromholm project, Tim Pestell; The liturgical use of space in 13th-century Flanders, Stijn Bossuyt; 'God will have a house': sacred space and rites of consecration in early 17th-century England, Andrew Spicer; 'Pure and white': reformed space for worship in early 17th-century Hungary, Graeme Murdock; Rubens's Raising of the Cross in context: the 'early Christian' past and the evocation of the sacred in post-tridentine Antwerp, Cynthia Lawrence; The consecration of the civic realm, Judi Loach; The priest, the Quakers and the Second Conventicle Act: the battle for Gracechurch Street Meeting House, 1670, Simon Dixon; La Ville Sonnant: the politics of sacred space in Avignon on the eve of the French Revolution, Eric Johnson. Index.

’Often engaging in an implicit dialogue with the historiography of other European countries and demonstrating awareness of current debates, this collection of essays takes into account the growing body of existing literature dedicated to the study of sacred space...The volume makes a major contribution in exploring the spatial boundaries between the ecclesiastical and domestic realms, the personal piety of the home and the public religious acts of the church...Given its interdisciplinary approach and the diversity of its contributors, this volume targets a vast array of specialist audiences as well as a broader readership at both graduate and undergraduate levels.’ History ’This collection of insightful and thought-provoking essays deals with aspects of 'sacred space' from the 1200s through the 1700s... this is an excellent anthology, well-suited for a scholarly audience, especially church historians, liturgists, and ritual theorists.’ Religious Studies Review ’Spicer and Hamilton's collection provides a closer understanding of how medieval and early modern Europe defined sacred space and how those definitions changed over the centuries... this collection is well-focused in scope and thoughtfully arranged. A compact introduction by the editors lays a convincing argumentative groundwork for an intelligent set of essays with a helpful index and thirty-three illustrations... A real strength of this study is the quality and depth of scholarship collected in one volume. Its range satisfies those interested in a close understanding of the complex, sweeping narrative of sacred space and how its definitions changed over a six hundred year period... In presenting a more complex and sophisticated understanding of how space was delineated, evoked, and perceived in medieval and early modern Europe, this collection enhances and deepens our understanding of sacred space as it is experienced from within the profane.’ Sixteenth Century Journal ’The collection pro