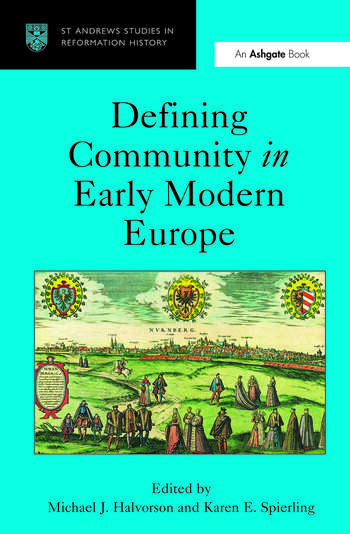 Numerous historical studies use the term "community'" to express or comment on social relationships within geographic, religious, political, social, or literary settings, yet this volume is the first systematic attempt to collect together important examples of this varied work in order to draw comparisons and conclusions about the definition of community across early modern Europe. Offering a variety of historical and theoretical approaches, the sixteen original essays in this collection survey major regions of Western Europe, including France, Geneva, the German Lands, Italy and the Spanish Empire, the Netherlands, England, and Scotland. Complementing the regional diversity is a broad spectrum of religious confessions: Roman Catholic communities in France, Italy, and Germany; Reformed churches in France, Geneva, and Scotland; Lutheran communities in Germany; Mennonites in Germany and the Netherlands; English Anglicans; Jews in Germany, Italy, and the Netherlands; and Muslim converts returning to Christian England. This volume illuminates the variety of ways in which communities were defined and operated across early modern Europe: as imposed by community leaders or negotiated across society; as defined by belief, behavior, and memory; as marked by rigid boundaries and conflict or by flexibility and change; as shaped by art, ritual, charity, or devotional practices; and as characterized by the contending or overlapping boundaries of family, religion, and politics. Taken together, these chapters demonstrate the complex and changeable nature of community in an era more often characterized as a time of stark certainties and inflexibility. As a result, the volume contributes a vital resource to the ongoing efforts of scholars to understand the creation and perpetuation of communities and the significance of community definition for early modern Europeans.

’Defining Community offers rich observation and analysis of community life, which will appeal to a broad spectrum of scholars.’ Journal of Ecclesiastical History ’As a preliminary effort to assess the state of the field of communal studies, this volume of essays is a most welcome and appropriate addition to the literature.’ Religious Studies Review 'This excellent collection of papers demonstrates how current cultural historians can do justice to a key idea and human experience by capturing its diversity, complexity, and subtlety. Here community is not sublime but historicized, and thus the volume deserves wide attention among scholars of culture and social interaction.' Sixteenth Century Journal 'The editors of this excellent volume are firstly to be commended for their informative introduction. They provide a very useful overview of recent research into community formation and definition in early modern Europe, stressing both the factors that allowed social, religious and political groups to assert their identity and also the many issues that made sustaining community cohesion an endlessly challenging task.' Reformation and Renaissance Review