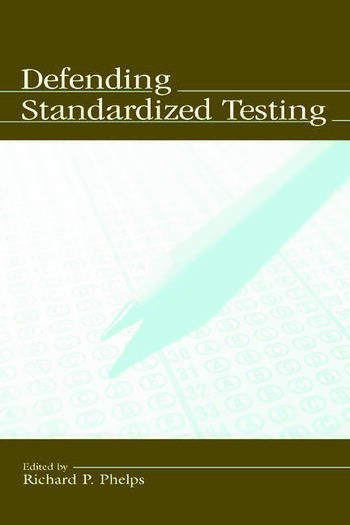 The education reform movement of the past two decades has focused on raising academic standards. Some standards advocates attach a testing mechanism to gauge the extent to which high standards are actually accomplished, whereas some critics accuse the push for standards and testing of impeding reform and perpetuating inequality. At the same time, the testing profession has produced advances in the format, accuracy, dependability, and utility of tests. Never before has obtaining such an abundance of accurate and useful information about student learning been possible. Meanwhile, the American public remains steadfast in support of testing to measure student performance and monitor the performance of educational systems.

Many educational testing experts who acknowledge the benefits of testing also believe that those benefits have been insufficiently articulated. Although much has been written on standardized testing policy, most of the material has been written by opponents. The contributing authors of this volume are both accomplished researchers and practitioners who are respected and admired worldwide. They bring to the project an abundance of experience working with standardized tests.

Defending Standardized Testing minimizes the use of technical jargon so as to appeal to all who have a stake in American educational reform.

"...an easy to read book...This book provides a balanced approach to understanding the role of testing in general and standardized testing in particular. It will help the reader identify and understand some of the current debates within the community of testing experts."
—PsycCRITIQUES