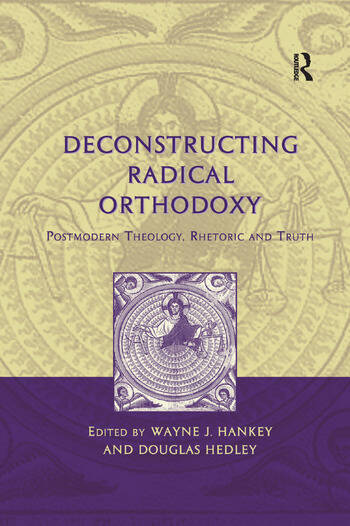 Radical Orthodoxy is the most influential theological development in a generation. Many have been bewildered by the range and intensity of the writings which constitute this movement. This book spans the breadth of the history of thought discussed by Radical Orthodoxy, tackling the accuracy of the historical narratives on which their position depends. The distinguished contributors examine the history of thought as presented by the movement, offering a series of critiques of individual Radical Orthodox 'readings' of key thinkers. Contributors: Eli Diamond, Wayne J. Hankey, Todd Breyfogle, John Marenbon, Richard Cross, Neil G. Robertson, Douglas Hedley, David Peddle, Steven Shakespeare, George Pattison, and Hugh Rayment-Pickard.

Wayne J. Hankey is Carnegie Professor of Classics at King's College and Dalhousie University, Canada. Douglas Hedley is Lecturer in Philosophy of Religion at Clare College and the Divinity Faculty, Cambridge University, UK.

’... the collective impact of these essays, if even half of the conclusions are correct, is devastating for Radical Orthodoxy as a movement. This work must thus feature as essential reading in the task of critically assessing Milbank and al.'s work.’ Theological Book Review ’The contributors offer careful counter-readings of many of the main figures in the metanarrative of Radical Oxthodoxy.’ Theology