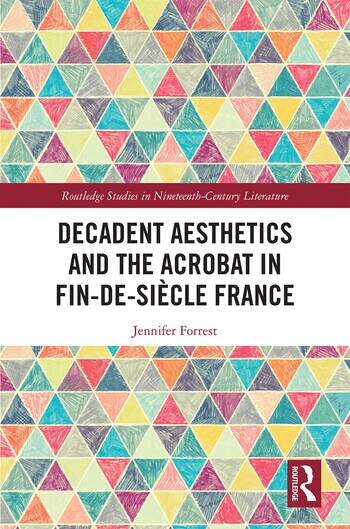 Decadent Aesthetics and the Acrobat in French Fin de siècle

In his discussion of clowns in nineteenth-century French painting from Jean-Léon Gérôme’s 1857 La Sortie du bal masqué to Georges Rouault, art historian Francis Haskell wondered why they are so sad. The myth of the sad clown as an allegory for the unappreciated artist found echoes in the work of literary counterparts like Charles Baudelaire and his "Vieux saltimbanque" who seeks in vain a responsive public. For some, the attraction of the acrobatic clown for the creative imagination may have been his ability to embody the plight of the artist: these artistes generally led an ambulatory and uncertain existence. Other artists and writers, however, particularly the Decadents, perceived in the circus acrobat – including the acrobatic clown – a conceptual and performative tool for liberating their points of view from the prison-house of aesthetic convention. If authors’ protagonists were themselves sometimes failures, their aesthetic innovations often produced exhilarating artistic triumphs. Among the works examined in this study are the circus posters of Jules Chéret, Thomas Couture’s Pierrot and Harlequin paintings, Honoré Daumier’s saltimbanque paintings, Edgar Degas’s Miss Lala au Cirque Fernando, Édouard Manet’s Un bar au Folies-Bergère, the pantomimes of the Hanlon-Lees troupe, and novels, short stories, and poems by Théodore de Banville, Edmond de Goncourt, J. K. Huysmans, Gustave Kahn, Jules Laforgue, Catulle Mendès, Octave Mirbeau, Jean Richepin, Edouard Rod, and Marcel Schwob.

Chapter Three: 1879, Part I: Suspending Identity with the Hanlon-Lees

Chapter Five: The Paradox of the Lady Acrobat

Chapter Six: The Poetics of Pantomime and Circus, Part I: Jules Laforgue

Jennifer Forrest is Professor of French at Texas State University. She is the editor of The Legend Returns and Dies Harder Another Day: Essays on Film Series (McFarland, 2008) and co-editor of Dead Ringers: The Remake in Theory and Practice (SUNY, 2002).

Decadent Aesthetics and the Acrobat in French Fin de siècle