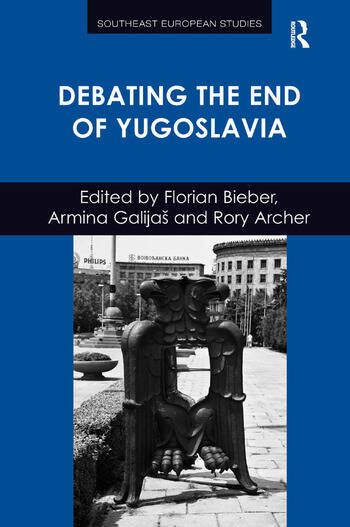 Debating the End of Yugoslavia

Countries rarely disappear off the map. In the 20th century, only a few countries shared this fate with Yugoslavia. The dissolution of Yugoslavia led to the largest war in Europe since 1945, massive human rights violations and over 100,000 victims. Debating the End of Yugoslavia is less an attempt to re-write the dissolution of Yugoslavia, or to provide a different narrative, than to take stock and reflect on the scholarship to date. New sources and data offer fresh avenues of research avoiding the passion of the moment that often characterized research published during the wars and provide contemporary perspectives on the dissolution. The book outlines the state of the debate rather than focusing on controversies alone and maps how different scholarly communities have reflected on the dissolution of the country, what arguments remain open in scholarly discourse and highlights new, innovative paths to study the period.

’In this anthology, a multidisciplinary group of scholars take stock of the massive literature surrounding the collapse of socialist Yugoslavia. By identifying blind spots� and methodological lapses, the best of these chapters push forward and chart a path for numerous research projects that will further advance our understanding of both Yugoslavia’s demise and link this scholarship to other cases.’ Christian Axboe Nielsen, Aarhus University, Denmark 'Overall this book is a timely addition to studies on not only the dissolution of Yugoslavia, but the concepts related to it - both in the ways they have shaped discussions over the decades, and in their potential to impact future scholarly discourse on the region. The accessibility of the volume coupled with the variety of subjects tackled allows it to be of interest to students, scholars, and even those with passing interest in the region, which is not something managed often in works aimed primarily at academic audiences.' LSE Review of Books 'Overall, this volume offers a number of insights into where the state of Yugoslav studies rests in 2014. Good works are out there, but it is nice to see the recognition of the problematic studies that still resonate among those scholars who have agendas or who are unfamiliar with the language, culture, and unique history of the Balkans. We can hopefully move forward and craft scholarship that takes these topics seriously and on their own merits. With that, I think the best audience for this book is among the budding graduate students and young faculty seeking to see how they can best fit their research agendas into Yugoslav studies.' Canadian Slavonic Papers

Debating the End of Yugoslavia