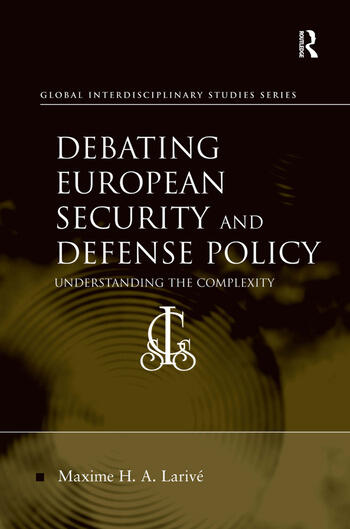 Dr. Larivé questions whether there is such a thing as a European defense and security policy. This book analyzes the integration process by clearly illustrating to the reader the two sides of the argument in order to understand the complexity of the problems in the different stages of the creation and implementation of the European defense policy. In doing so, this study asks the question of why has the process been so halting and of such limited scope? Structured in three parts: Theories, analyzing the theoretical debates raised by the positivist paradigms of neorealism, liberalism and constructivism on European security; History, reflecting on the impacts of the Cold War, American foreign policy, the 2008 economic crisis, and the evolution of European strategy; and, Actors, by looking at the role of European institutions, Member States, and the CSDP on the transformation of the European defense policy since 1998. Each chapter is composed of sub questions allowing the reader to grasp the different forces explaining the deepening or lack of the deepening process of the CSDP. Ultimately, this book offers a unique base for fostering discussion, understanding and critical thinking on the CSDP.

’This book cleverly contrasts opposing views about ten of the main topics of the CSDP since its inception in 1998. The strength of the analysis is based on the adoption of an innovative approach for uncovering the limits of absolute explanations and on the subtle persuasion to develop a more balanced, selective and accurate assessment of the CSDP.’ Roberto Dominguez, Suffolk University, Boston, USA ’In this worthy contribution to the existing literature on CSDP, Maxime Larivé takes a comprehensive and somewhat controversial approach to this EU policy as each topic is deconstructed through a range of apposite theoretical explanations. LariveÌ�’s book is valuable for both International Relations and EU studies scholars willing to better understand European integration and the value of security and defence policy as a tool for projecting Europe as an international actor, and for founding a European identity.’ Natividad FernaÌ�ndez Sola, University of Zaragoza, Spain 'The book is structured in a functional way that guides the reader in discovering and examining this crucial subject in depth. ... the plain language and schematic structure make the book suitable for students aiming to acquire a critical awareness of the subject. Larivé succeeds in putting readers in an active position, challenging their opinions and knowledge of the subject.' International Spectator