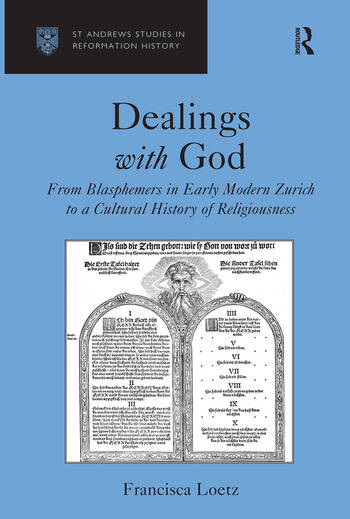 Dealings with God: From Blasphemers in Early Modern Zurich to a Cultural History of Religiousness

Early modern European society took a serious view of blasphemy, and drew upon a wide range of sanctions - including the death penalty - to punish those who cursed, swore and abused God. Whilst such attitudes may appear draconian today, this study makes clear that in the past, blasphemy was regarded as a very real threat to society. Based on a wealth of primary sources, including court records, theological and ecclesiastical writings and official city statutes, Francisca Loetz explores verbal forms of blasphemy and the variety of contexts within which it could occur. Honour conflicts, theological disputation, social and political provocation, and religious self-questioning all proved fertile ground for accusations of blasphemy, and her contention - that blasphemers often meant more than they said - reveals the underlying complexity of an apparently simple concept. This innovative approach interprets cases of verbal blasphemy as 'speech actions' that reflect broader political, social and religious concerns. Cases in Protestant Zurich are compared with the situation in Catholic Lucerne and related to findings in other parts of Europe (Germany, France, England, Italy) to provide a thorough discussion of different historical approaches to blasphemy - ecclesiastical, legal, intellectual, social, and cultural - in the Early Modern period. In so doing the book offers intriguing suggestions about what a cultural history of religiousness could and should be. By linking a broad overview of the issue of blasphemy, with case studies from Zurich and Lucerne, this book provides a fascinating insight into a crucial, but often misunderstood aspect of early-modern society. The conclusions reached not only offer a much fuller understanding of the situation in Zurich, but also have resonance for all historians of Reformation Europe.

Francisca Loetz is a Professor at the University of Zurich, Switzerland.

'... Dealings with God is a meticulous and comprehensive study about blasphemy and a model of social scientific rigor and methods.' Sixteenth Century Journal 'In all, the book offers a highly insightful discussion of a sociocultural phenomenon that inseparably links religious, administrative, political and social linguistic action. It is precisely this link that historical corpus pragmatists should not lose sight of when trying to make sense of linguistic material that is encoded in statistical data.' Journal of Historical Pragmatics

Dealings with God: From Blasphemers in Early Modern Zurich to a Cultural History of Religiousness