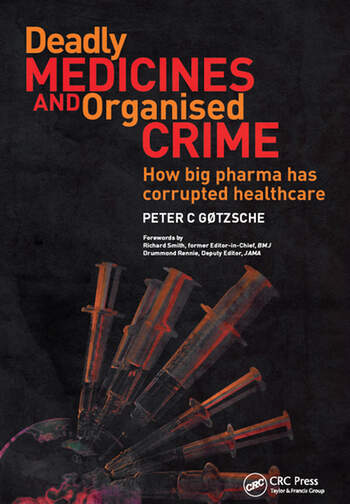 PRESCRIPTION DRUGS ARE THE THIRD LEADING CAUSE OF DEATH AFTER HEART DISEASE AND CANCER. In his latest ground-breaking book, Peter C Gotzsche exposes the pharmaceutical industries and their charade of fraudulent behaviour, both in research and marketing where the morally repugnant disregard for human lives is the norm. He convincingly draws close comparisons with the tobacco conglomerates, revealing the extraordinary truth behind efforts to confuse and distract the public and their politicians. The book addresses, in evidence-based detail, an extraordinary system failure caused by widespread crime, corruption, bribery and impotent drug regulation in need of radical reforms. "The main reason we take so many drugs is that drug companies don't sell drugs, they sell lies about drugs. This is what makes drugs so different from anything else in life...Virtually everything we know about drugs is what the companies have chosen to tell us and our doctors...the reason patients trust their medicine is that they extrapolate the trust they have in their doctors into the medicines they prescribe. The patients don't realise that, although their doctors may know a lot about diseases and human physiology and psychology, they know very, very little about drugs that hasn't been carefully concocted and dressed up by the drug industry...If you don't think the system is out of control, please email me and explain why drugs are the third leading cause of death...If such a hugely lethal epidemic had been caused by a new bacterium or a virus, or even one-hundredth of it, we would have done everything we could to get it under control." FROM THE INTRODUCTION

Foreword by Richard Smith. Foreword by Drummond Rennie. About the author. Introduction. Confessions from an insider. Asthma deaths were caused by asthma inhalers. Shady marketing and research. Organised crime, the business model of big pharma. Hoffman-La Roche, the biggest drug pusher. Hall of Shame for big pharma. The crimes are repetitive. It's organised crime. Very few patients benefit from the drugs they take. Clinical trials, a broken social contract with patients. Conflicts of interest at medical journals. The corruptive influence of easy money. What do thousands of doctors on industry payroll do? Seeding trials. Rent a key opinion leader to 'give advice'. Rent a key opinion leader to 'educate'. Hard sell. Clinical trials are marketing in disguise. Ghostwriting. The marketing machine. Hard sell ad nauseam. Highly expensive drugs. Excesses in hypertension. Patient organisations. NovoSeven for bleeding soldiers. Impotent drug regulation. Conflicts of interest at drug agencies. Corruption at drug agencies. The unbearable lightness of politicians. Drug regulation builds on trust. Inadequate testing of new drugs. Too many warnings and too many drugs. Public access to data at drug agencies. Our breakthrough at the EMA in 2010. Access to data at other drug agencies. Deadly slimming pills. Neurontin, an epilepsy drug for everything. Merck, where the patients die first. Fraudulent celecoxib trial and other lies. Marketing is harmful. Switching cheap drugs into expensive ones in the same patients. Novo Nordisk switches patients to expensive insulin. Astra-Zeneca switches patients to expensive me-again omeprazole. Blood glucose was fine but the patients died. Novo Nordisk interferes with an academic publication. Psychiatry, the drug industry's paradise. Are we all crazy or what? Psychiatrists as drug pushers. The chemical imbalance hoax. Screening for psychiatric disorders. Unhappy pills. Prozac, a terrible Eli Lilly drug turned into a blockbuster. Exercise is a good intervention. Further lies about happy pills. Pushing children into suicide with happy pills. Glaxo study 329. Concealing suicides and suicide attempts in clinical trials. Lundbeck's evergreening of citalopram. Antipsychotic drugs. Zyprexa, another terrible Eli Lilly drug turned into a blockbuster. The bottomline of psychotropic drugs. Intimidation and threats to protect sales. Busting the industry myths. General system failure calls for a revolution. Our drugs kill us. How much medicine do we really need and at what cost? For-profit is the wrong model. Clinical trials. Drug regulatory agencies. Drug formulary and guideline committees. Drug marketing. Doctors and their organisations. Patients and their organisations. Medical journals. Journalists. Having the last laugh at big pharma. Money don't smell. Creating diseases. Index.

Professor Peter C Gøtzsche graduated as a Master of Science in biology and chemistry in 1974 and as a physician in 1984. He is a specialist in internal medicine; he worked with clinical trials and regulatory affairs in the drug industry 1975–83, and at hospitals in Copenhagen 1984–95. He co-founded The Cochrane Collaboration in 1993 and established The Nordic Cochrane Centre the same year. He became professor of Clinical Research Design and Analysis in 2010 at the University of Copenhagen., Peter Gøtzsche has published more than 50 papers in ‘the big five’ (BMJ, Lancet, JAMA, Annals of Internal Medicine and New England Journal of Medicine) and his scientific works have been cited over 10000 times., Peter Gøtzsche has an interest in statistics and research methodology. He is a member of several groups publishing guidelines for good reporting of research and has co-authored CONSORT for randomised trials (www.consort-statement.org), STROBE for observational studies (www.strobe-statement.org), PRISMA for systematic reviews and meta-analyses (www.prisma-statement.org), and SPIRIT for trial protocols (www.spirit-statement.org). Peter Gøtzsche is an editor in the Cochrane Methodology Review Group.