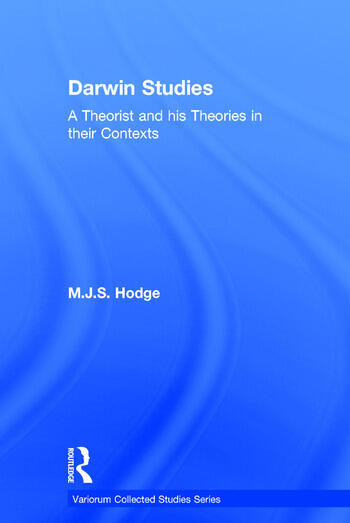 Darwin Studies: A Theorist and his Theories in their Contexts

This is the second of a pair of volumes by Jonathan Hodge, collecting all his most innovative, revisionist and influential papers on Charles Darwin and on the longer run of theories about origins and species from ancient times to the present. The focus here is on Darwin himself and the development of his theories. Darwin is now such an iconic hero in our histories and such a commanding authority in our sciences that it has become a serious challenge to study him as just another disaffected medical student - or would-be vicar, aspiring zoology professor or gentleman of independent means -- thinking about sexual reproduction in animals and plants, about coral islands or about rock strata and fossils in post-Napoleonic Edinburgh, Cambridge, South America and London. But the challenge is one well worth taking up, as the papers here demonstrate, for such studies require us integrate the precise details of his inquiries with those larger scientific, metaphysical, religious and political issues of the day that a young, ambitious 'philosopher' and 'naturalist' was then expected to engage. This contextual understanding can then allow us to reinterpret his relations to such longer- run legacies as Christian Platonism, Enlightenment materialism and British capitalism. Together with the companion volume devoted to those and other long run legacies, this volume offers throughout reinterpretations of both the theorist and his theories.

Contents: Introduction; Bibliography; Against 'revolution' and 'evolution'; Darwin and the laws of the animate part of the terrestrial system (1835-37): on the Lyellian origins of his zoonomical explanatory system; Darwin studies at work: a re-examination of 3 decisive years (1835-37); The notebook programmes and projects of Darwin's London years; The immediate origins of natural selection; Darwin as lifelong generation theorist; Darwin, species and the theory of natural selection; [Darwin's reception in] England; One Marxist view of Darwin's ideas; Darwin, the respectable, dissident, subversive gentleman; Index.

M. J. S. Hodge is Senior Fellow in the Division of History and Philosophy of Science in the School of Philosophy, University of Leeds, UK.

’Since the centennial year for the Origin of Species was celebrated in 1959, there has been a magnificent outpouring of scholarship devoted to understanding Darwin's work and its intellectual context. M. J. S. Hodge has been a well-read and constructive member of the community of scholars working on that subject. His collected writings are unique, engaging, and permanently valuable contributions to scholarship.’ Aestimatio ’Darwinian historians looking for a self-check on where their industry stands will directly benefit from the retrospective offered here, and non-Darwinian historians may make good use of it as an example of how to be concerned about why we write history the way we do, and how we can do it better. That is one of Hodge's primary contributions to the Darwin industry: he is a watchdog of proper inquisitional diligence. These articles show Hodge in full service of that goal. In fact, Hodge's existence in that role may help explain how an 'industry' has sprung up around Darwin and nobody else: Darwin's own complexity, coupled with an almost unparalleled archive, not only invites but demands the constant revisiting of historiography that Hodge displays here.’ Bulletin of the Pacific Circle 'This [...] collection of previously published papers by Jonathan Hodge not only brings to light a number of essays published in now hard to find places but also offers an unparalleled opportunity for tracing the historiographic trajectory of a leading Darwin historian over more than thirty years of intellectual achievement.' Metascience 'Incisive is a good word to describe Hodge’s famous scholarly style. As some of these papers and reviews demonstrate, he gets to the crux of any issue effortlessly, and often with astonishing directness. Who else can pack such brainy 'oomph' in the space of just a few pages, and in the unconventional form of a review article, instead of some long-winded monograph-length treatise? That, I suspect, is one reason the col

Darwin Studies: A Theorist and his Theories in their Contexts