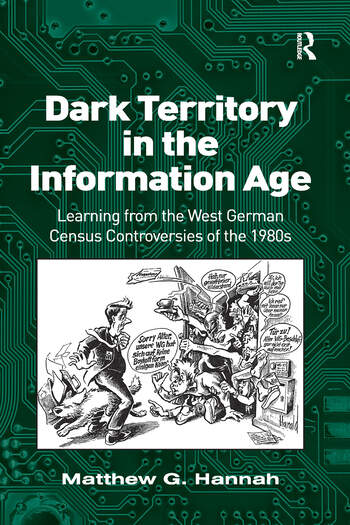 Dark Territory in the Information Age: Learning from the West German Census Controversies of the 1980s

Through a detailed account of the West German census controversies of the 1980s, this book offers a robust and geographical sense of what effective 'resistance' and 'empowerment' might mean in an age when the intensification of 'surveillance society' appears to render us ever more passive and incapable of controlling our own registration.

Contents: Preface; Introduction; The 1983 boycott movement: development, themes and tactics; 'The sensitivity of a steamroller'? The state at cross-purposes; Interlude; A new 'war of religion': ideological battle lines in 1987; The battle in the streets, stairwells and courtrooms; Conclusions; References; Index.

Matthew G. Hannah is Professor at the Institute of Geography and Earth Sciences at Aberystwyth University, UK

Prize: Winner of the Julian Minghi Outstanding Research Award, 2011 'Not many of us think to question so fundamental and banal a part of modern life as the census. Dark Territory in the Information Age, makes it clear that we ought to. In this timely, exciting, important, and vividly told historical geography of the West German census boycotts of the 1980s, Matt Hannah shows us not only why so many West Germans refused to participate in state plans to count and categorize them, but why it was so vital that they did. By bringing to light an almost-forgotten historical moment at the tail end of the Cold War, Hannah illuminates the dark territories through which power works, while making it clear that the real question facing us in the "information age" is not what is done with all the information about us that corporations and the state collects (as so much privacy activism seems to think), but how and why it is collected in the first place. Dark Territory in the Information Age is at once a brilliant unfolding of a social struggle of lasting importance in and beyond Germany, and a blueprint for current struggles over the gathering of information in a world seemingly bent on citizenship defined by brutal and total exposure.' Don Mitchell, Syracuse University, USA 'Matt Hannah's new book is the best kind of historical scholarship: it has the curious and unsettling feeling of opening a forgotten attic box to find a description of the present. In re-examining the 1980s anti-census movements in West Germany, Hannah turns much of what we think we know about "surveillance society" on its head, re-opening the route to strategies for resistance beyond individualistic legal concepts of "data protection" and "privacy" towards the delineation of spaces where government simply cannot look.' David Murakami Wood, Queen's University, Canada

Dark Territory in the Information Age: Learning from the West German Census Controversies of the 1980s