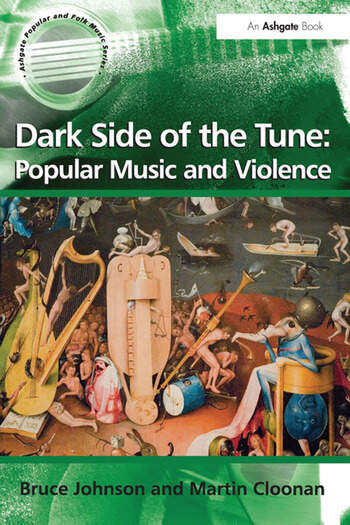 Dark Side of the Tune: Popular Music and Violence

Written against the academically dominant but simplistic romanticization of popular music as a positive force, this book focuses on the 'dark side' of the subject. It is a pioneering examination of the ways in which popular music has been deployed in association with violence, ranging from what appears to be an incidental relationship, to one in which music is explicitly applied as an instrument of violence. A preliminary overview of the physiological and cognitive foundations of sounding/hearing which are distinctive within the sensorium, discloses in particular their potential for organic and psychic violence. The study then elaborates working definitions of key terms (including the vexed idea of the 'popular') for the purposes of this investigation, and provides a historical survey of examples of the nexus between music and violence, from (pre)Biblical times to the late nineteenth century. The second half of the book concentrates on the modern era, marked in this case by the emergence of technologies by which music can be electronically augmented, generated, and disseminated, beginning with the advent of sound recording from the 1870s, and proceeding to audio-internet and other contemporary audio-technologies. Johnson and Cloonan argue that these technologies have transformed the potential of music to mediate cultural confrontations from the local to the global, particularly through violence. The authors present a taxonomy of case histories in the connection between popular music and violence, through increasingly intense forms of that relationship, culminating in the topical examples of music and torture, including those in Bosnia, Darfur, and by US forces in Iraq and GuantÃ¡namo Bay. This, however, is not simply a succession of data, but an argumentative synthesis. Thus, the final section debates the implications of this nexus both for popular music studies itself, and also in cultural policy and regulation, the ethics of citizenship, and arguments about human rights.

’(an) extraordinary new book ... There are real implications in this book for policy debates and it deserves to be widely read. It is a model of clear and sophisticated writing and a pleasure to read despite the often disturbing subject matter.’ Times Higher Education ’Brilliant’ Caspar Melville, BBC Radio 4 ’... not only a brave book but also, given the increased incursion of sound in every day life (mobile ringtones, the hiss of iPods, telephone hold music) a timely one... the incidental pleasures of Dark Side of the Tune are many: the artful combination of anecdote and fact results in a sharp book that necessarily asks more questions than it answers.’ Times Literary Supplement ’The relationship of music to the dark, cruel and violent side of human nature has been very seldom studied. The book reminds us of a connection between humans and music that has always been part of their shared heritage, as early as the mythic song of the Sirens and the biblical accounts of Jericho. The research by Johnson and Cloonan is informed by an excellent understanding of the long history of the evolution of music.’ Turun Sanomat ’...a thorough examination of the history of this troubled relationship...Highly recommended. All readers.’ Choice ’Dark Side of the Tune is an important and very interesting book and in no way hard to read as it gorges itself on a long chain of empirical material which is appropriately open to readers for further investigation. It is also a very broad study, still it does hold on to its goal and sticks to the proposed agenda. ... In an ethnographic reading - and also in the theoretical points set up by the authors - music is part of social life, as such integral to human organisation and therefore violence occurs in music as in real life. The book is highly recommended.’ Popular Musicology Online ’In Bruce Johnson and Martin Cloonan's book Dark Side of the Tune: Popular Music and Violence, the authors provide one of t

Dark Side of the Tune: Popular Music and Violence