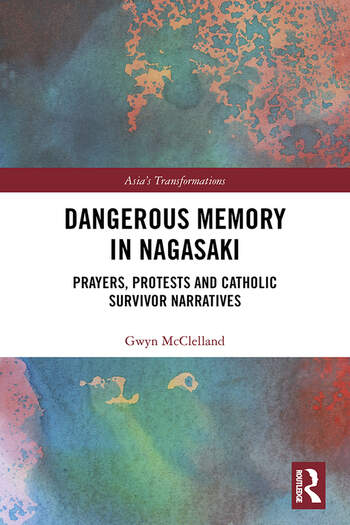 On 9th August 1945, the US dropped the second atomic bomb on Nagasaki. Of the dead, approximately 8500 were Catholic Christians, representing over sixty percent of the community. In this collective biography, nine Catholic survivors share personal and compelling stories about the aftermath of the bomb and their lives since that day.

Examining the Catholic community’s interpretation of the A-bomb, this book not only uses memory to provide a greater understanding of the destruction of the bombing, but also links it to the past experiences of religious persecution, drawing comparisons with the ‘Secret Christian’ groups which survived in the Japanese countryside after the banning of Christianity. Through in-depth interviews, it emerges that the memory of the atomic bomb is viewed through the lens of a community which had experienced suffering and marginalisation for more than 400 years. Furthermore, it argues that their dangerous memory confronts Euro-American-centric narratives of the atomic bombings, whilst also challenging assumptions around a providential bomb.

presents the voices of Catholics, many of whom have not spoken of their losses within the framework of their faith before. As such, it will be invaluable to students and scholars of Japanese history, religion and war history.

7. Water! Atomic Cries and Echoes of the Past

Gwyn McClelland holds a Master of Divinity from the University of Divinity, Melbourne, Australia and a Doctorate of Philosophy in Japanese history from Monash University. He is the winner of the 2019 John Legge prize for best thesis in Asian Studies, awarded by the Asian Studies Association of Australia (ASAA).

The voices included in this collective biography are indeed "dangerous," as they disturb the order, calling into question the legitimacy of orthodoxy. As McClelland, drawing upon Johann Baptist Metz’s concept of a dangerous memory, demonstrates in this monograph, such voices are worth studying, precisely because their memories make an opening into the continuity of history, driving a wedge into the monolithic architecture of a discourse. Only out of such disjuncture, can a change for the future emerge.

Gwyn McClelland has written a compelling deep history of the atomic bombing of Nagasaki. Using a framework of the concept of "dangerous memory", and unique and careful oral histories of survivors of the atomic bombing from within the Nagasaki Catholic community, McClelland has drawn together a powerful account of the complex politics surrounding that ‘fissured’ city and community both before and after the bombings. Nagasaki’s Catholic community has a story that has been marginalised for far too long. Through a lens of ‘dangerous memory’, the author and the authentic contributing voices of the kataribe survivors offer a searingly powerful insight to the events of 1945 and the impacts that continue for that community even today. It is a brave and complex story, and one for which I am deeply grateful.

Dimity Hawkins (AM), Co-founder of the International Campaign to Abolish Nuclear Weapons