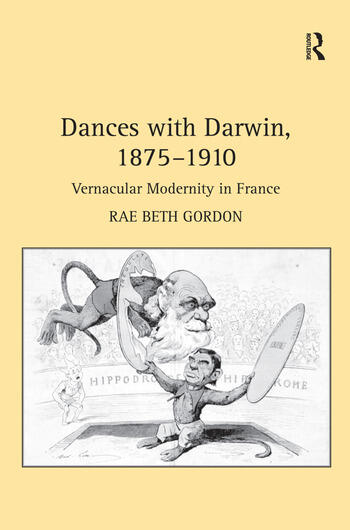 Examining the extraordinary influence of Darwin's theory of evolution on French thought from 1875 to 1910, Rae Beth Gordon argues for a reconsideration of modernism both in time and in place that situates its beginnings in the French café-concert aesthetic. Gordon weaves the history of medical science, ethnology, and popular culture into a groundbreaking exploration of the cultural implications of gesture in dance performances at late-nineteenth-century Parisian café-concerts and music halls. While art historians have studied the ties between primitivism and modernism, their convergence in fin-de-siècle popular entertainment has been largely overlooked. Gordon argues that while the impact of Darwinism was unprecedented in science, it was no less present in popular culture through the popular press and popular entertainment, where it constituted a kind of "evolutionist aesthetic" on display in the café-concert, circus, and music-hall as well as in the spectator's reception of the representations on the stage. Modernity in these sites, Gordon contends, was composed by the convergence of contemporary medical theory with representations of the primitive, staged in entertainments that ranged from the can-can, Missing Links, and epileptic singers to the Cake-Walk. Her anthropology of gesture uncovers in these dislocations of the human form an aesthetic of disorder a half century before the eruptions of Dada and Surrealism.

Rae Beth Gordon is Professor emerita of French Literature and Cultural Studies, University of Connecticut, Storrs. Author of numerous essays on 19th-century medicine, literature, and aesthetics, she has written Ornament, Fantasy, and Desire in Nineteenth-Century French Literature (1992) and Why the French love Jerry Lewis: From Cabaret to Early French Cinema (2001).

'In a hugely ambitious, richly detailed, and meticulously executed study, Rae Beth Gordon makes a forceful case for the audacious claim that the "vernacular modernism" of nineteenth-century music hall performance directly influenced the "high" modernism of twentieth-century avant-garde movements such as Dada and Surrealism. Her book's likely impact cannot be overstated.' Elizabeth Ezra, University of Stirling, UK 'Rae Beth Gordon's startling but ultimately convincing book focuses on the impact of Darwinian evolutionary theory on popular and crowd-pleasing entertainment in turn-of-the century France. Her readings of Alfred Jarry's Ubu cycle and the artistic geneology of Josephine Baker are nothing short of riveting, as what might be seen as vulgar sexism and blatant racism are cast as complex prisms through which spectators experienced and negotiated the Other in themselves.' Judith Miller, New York University, USA ’Dances with Darwin is a fascinating read and a useful contribution to studies in modernity, drawing a convincing case for ’an aesthetic of disorder a half century before the eruptions of Dada and Surrealism.’ Gordon questions previous boundaries of ’modernity’ in vernacular culture in France, asking (regarding Baker) ’how was it possible that the public forget they had applauded ’animalistic,’ ’disarticulated’ and ’epileptic’ women a generation earlier?’ (274). If the public did forget, Dances with Darwin helps to remind, locate, and vividly enlighten.’ British Society for Literature and Science ’Dances with Darwin successfully manages to portray an era that tamed its fears by means of staged eccentricities and cynically appropriated the science of evolution. Far from resigning to a simple investigation of gesture and movement, the author resurrects early modernism as a compact set of structures of meaning where, as Clifford Geertz suggested, twitches, winks, burlesque and imitation are produced, perceived and interpre