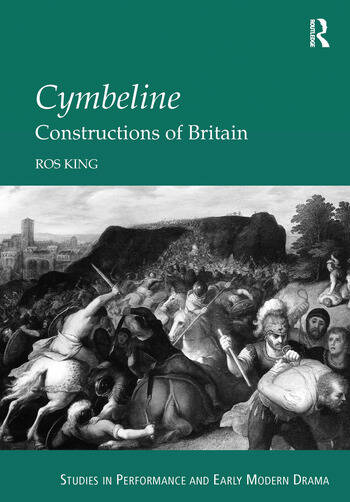 In Cymbeline: Constructions of Britain, Ros King argues that because of previous misunderstanding of the nature and history of tragi-comedy, critics have mistaken the tone of Shakespeare's play. Although it is often dismissed as a pedestrian 'romance', or at best a self-parodic reworking of previous Shakespearean themes, she proposes that Cymbeline's fantastical, black comedy and its facility for keeping multiple plots all in the air together are in fact a tour de force of dramaturgical construction. King's multi-faceted approach combines strikingly perceptive commentaries on the text's most notoriously difficult passages, with descriptions of performance, and analysis of the text's historical, cultural and literary contexts. In this wide-ranging study, the play becomes a focus for considering early modern England's encounters with its Scottish king, with religious struggle in Europe, and with the indigenous peoples of North America. King demonstrates that the play's dramaturgical structure enables it to raise daring questions about the nature of government, the rights of birth and of succession, and the concepts of 'empire', supplying a curiously bitter and indeed tragic undercurrent to the final 'happy' ending while attempting to neutralise contemporary religious conflict. Having explored the influences that went into the writing of Cymbeline, King devotes her final chapter to the play's later reception and shows how it has been made to respond to different cultural pressures over time. Using as a test case the outrageously ebullient production at Shakespeare Santa Cruz, 2000, for which she was dramaturg, she outlines an ethic for interpretation and considers the problems to be faced in both criticism and performance when realising the text as living theatre for a modern audience.

Ros King is Professor of English at the University of Southampton. A textual editor as well as a musician, theatre director and dramaturg, she is the author of The Works of Richard Edwards: Politics, Poetry and Performance in Sixteenth-century England and many articles on Shakespeare and Performance.

'Most of [Ros King's] valuable insights and conclusions would have been hard to come by without this first-hand professional experience. The concrete observations are astute and incisive, showing once again how much the keen theatrical eye can contribute to the full understanding of dramaturgy... the persuasiveness of this enthusiastic and cogent return to one of Shakespeare's less popular work.' English Studies ’Ros King's new study of Cymbeline offers a detailed and ambitious account of the play as both text and performance...The book encompasses not only different critical modes - historicism, close reading, cultural studies - but different genres too; it is both academic study and personal memoir. In adopting this eclectic approach, the book assumes something of the quality of the play which is its subject...King's study alerts us anew to the many layers of complexity in Shakespeare's play.’ Sixteenth Century Journal ’... a rigorous and informative analysis of Cymbeline, its language, themes, characters and performance contexts. This timely study explores the play through a variety of themes common to contemporary critics, yet surprisingly hitherto overlooked in relation to a play so inextricably linked to notions of empire, nation and monarchy... This inclusive and ambitious monograph therefore offers an insightful and fresh reading of Cymbeline, its historical contexts and the multiple interpretative possibilities implicit in the language and realized through performance.’ The Year's Work in English Studies