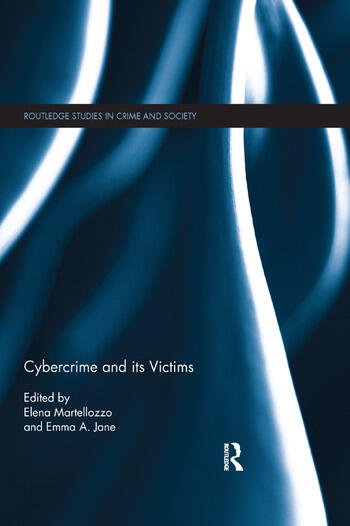 Cybercrime and its victims

The last twenty years have seen an explosion in the development of information technology, to the point that people spend a major portion of waking life in online spaces. While there are enormous benefits associated with this technology, there are also risks that can affect the most vulnerable in our society but also the most confident. Cybercrime and its victims explores the social construction of violence and victimisation in online spaces and brings together scholars from many areas of inquiry, including criminology, sociology, and cultural, media, and gender studies.

The book is organised thematically into five parts. Part one addresses some broad conceptual and theoretical issues. Part two is concerned with issues relating to sexual violence, abuse, and exploitation, as well as to sexual expression online. Part three addresses issues related to race and culture. Part four addresses concerns around cyberbullying and online suicide, grouped together as ‘social violence’. The final part argues that victims of cybercrime are, in general, neglected and not receiving the recognition and support they need and deserve. It concludes that in the volatile and complex world of cyberspace continued awareness-raising is essential for bringing attention to the plight of victims. It also argues that there needs to be more support of all kinds for victims, as well as an increase in the exposure and punishment of perpetrators.

Drawing on a range of pressing contemporary issues such as online grooming, sexting, cyber-hate, cyber-bulling and online radicalization, this book examines how cyberspace makes us more vulnerable to crime and violence, how it gives rise to new forms of surveillance and social control and how cybercrime can be prevented.

Introduction: Victims of Cybercrime On the Small ‘I’ Internet, Emma A. Jane and Elena Martellozzo

1. Victims of Cybercrime: Definitions and Challenges, Nicole A. Vincent

3. Gendered Cyberhate, Victim-Blaming, And Why the Internet Is More Like Driving a Car On a Road Than Being Naked in The Snow, Emma A. Jane

11. Conclusion Beyond Law: Protecting Victims Through Engineering and Design, Nicole A Vincent and Emma A. Jane

Elena Martellozzo is a criminologist and senior lecturer at Middlesex University, UK. She works extensively with children and young people, sex offenders and practitioners. Her research includes exploring children and young people’s online behaviour, the analysis of sexual grooming, online sexual exploitation and police practice in the area of child sexual abuse.

Emma A. Jane is a Senior Research Fellow and Senior Lecturer at the University of New South Wales, Australia. Misogyny online, cyberhate, internet mobs, digital vigilantism ("digilantism"), and non-legislative interventions for technology-related crime are the current foci of her ongoing research into the social and ethical implications of emerging technologies. In 2016, the public benefit of her research into misogyny online was recognised when she was named the Anne Dunn Scholar of the Year.

Cybercrime and its victims