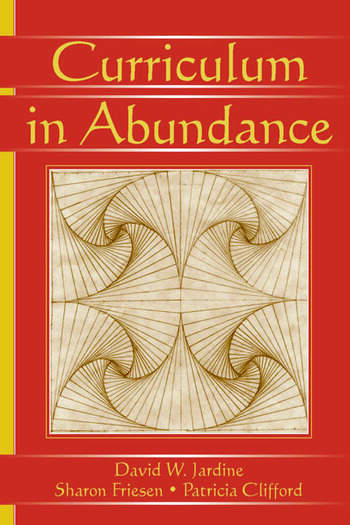 In this text Jardine, Clifford, and Friesen set forth their concept of curriculum as abundance and illustrate its pedagogical applications through specific examples of classroom practices, the work of specific children, and specific dilemmas, images, and curricular practices that arise in concrete classroom events. The detailed classroom examples and careful philosophical explorations illustrate the difference it makes in educational theory and classroom practice to think of the curriculum topics entrusted to teachers and students in schools as abundant.

The central idea is that viewing what is available to teachers and students in classrooms as abundant, rather than scarce, makes available the unseen histories, language, images, and ideas in everyday classroom life–makes it possible to break open the flat, literal “ordinariness” of classroom events, makes their complex and contested meanings visible, understandable, and pedagogically useful. Understanding the disciplines entrusted to schools (such as mathematics, writing, reading) as living inheritances, not as inert, finished, static, manipulable objects, means that the work of the classroom requires getting in on the real, living conversations that constitute these disciplines as they actually function in the classroom. This view of curriculum as abundance has a profound effect on classroom practice.

Curriculum in Abundance addresses curriculum and teaching topics such as mathematics, science, environmental education, social studies, language arts, and the arts curriculum; issues that arise from inviting student-teachers and practicing teachers into the idea of curriculum of abundance; the issue of information and communications technologies in the classroom; and the philosophical underpinnings of constructivism and the dilemmas it poses to thinking about curriculum in abundance. All of the chapters provide images of how to conduct interpretive research in the classroom.

This critically important text for undergraduate and master’s-level courses on curriculum methods, curriculum theory, teacher research, and philosophy of education speaks eloquently to students, teachers, teacher educators, and researchers across the field of education.