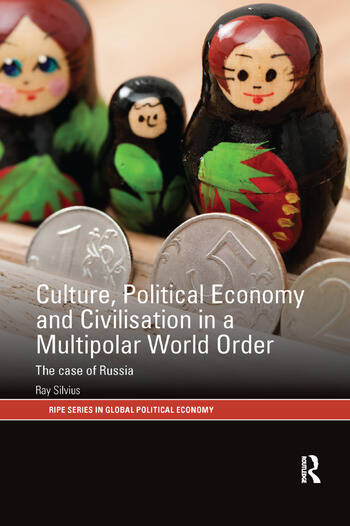 Culture, Political Economy and Civilisation in a Multipolar World Order: The Case of Russia

This book seeks to understand how Russia’s multifaceted rejection of American unipolarity and de-territorialised neo-liberal capitalism has contributed to the gestation of the present multipolar moment in the global political economy. Analysing Western world order precepts via the actions of a powerful, albeit precarious, national political economy and state structure situated on the periphery of Western world order, Silvius explores the manner in which culture and ideas are mobilised for the purposes of national, regional and international political and economic projects in a post-global age.

This book will be of great interest to students and scholars of Russian Foreign Policy, IPE and comparative political economy.

Chapter 4: The Embedding of Russian State-Sanctioned Multipolarity in the Post-Soviet Conjuncture

Chapter 5: The Russian State, Eurasianism, and Civilisations in the Contemporary Global Political Economy

Chapter 7: The Legacy of Vladislav Surkov: Regime Sanctioned Culture in the Service of National Political Economy

Ray Silvius is an Assistant Professor in the Department of Political Science at the University of Winnipeg, Canada. He writes on international political economy, Russia, the emerging multipolar world order, and the political economy of refugees.

Culture, Political Economy and Civilisation in a Multipolar World Order: The Case of Russia