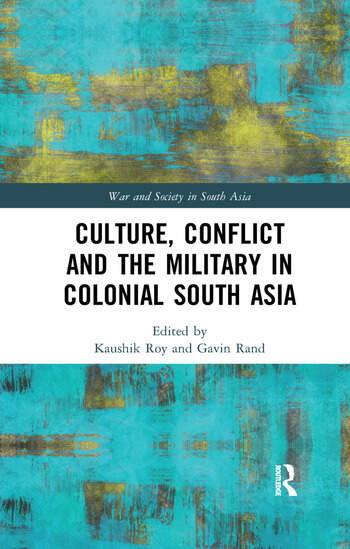 Culture, Conflict and the Military in Colonial South Asia

This book offers diverse and original perspectives on South Asia’s imperial military history. Unlike prevailing studies, the chapters in the volume emphasize both the vital role of culture in framing imperial military practice and the multiple cultural effects of colonial military service and engagements. The volume spans from the early East India Company period through to the Second World War and India’s independence, exploring themes such as the military in the field and at leisure, as well as examining the effects of imperial deployments in South Asia and across the British Empire. Drawing extensively on new archival research, the book integrates previously disparate accounts of imperial military history and raises new questions about culture and operational practice in the colonial Indian Army.

This work will be of interest to scholars and researchers of modern South Asian history, war and strategic studies, military history, the British Empire, as well as politics and international relations.

Kaushik Roy is Guru Nanak Chair Professor in the Department of History, Jadavpur University, Kolkata, West Bengal, India, and Global Fellow at the Peace Research Institute Oslo (PRIO), Norway. He has published widely on the British-Indian Army and counter-insurgency in Asia.

is Principal Lecturer in History at the University of Greenwich, London, UK. He has published on the recruiting and ideologies of the colonial Indian Army as well as on imperial military administration and governance. He is currently writing a cultural history of the Indian Army in the colonial period.

Culture, Conflict and the Military in Colonial South Asia