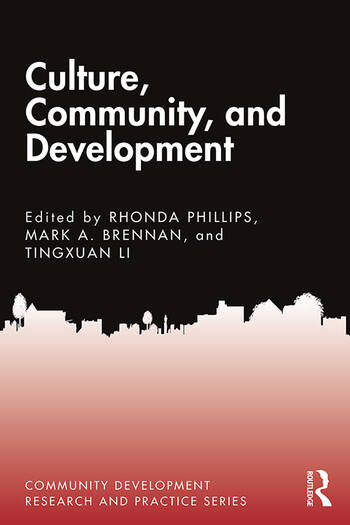 Culture is a living thing. In social settings, it is often used to represent entire ways of life, including rules, values, and expected behavior. Varying from nation to nation, neighborhood to neighborhood and beyond, even in the smallest localities, culture is a motivating factor in the creation of social identity and serves as a basis for creating cohesion and solidarity.

This book explores the intersection of culture and community as a basis for locally and regionally based development by focusing on three core bodies of literature: theory, research, and practice. The first section, theory, uncovers some of the more relevant historical arguments, as well as more contemporary examinations. Continuing, the research section sheds light on some of the key concepts, variables, and relationships present in the limited study of culture in community development. Finally, the practice section brings together research and theory into applied examples from on the ground efforts.

During a time where the interest to retain the uniqueness of local life, traditions, and culture is significantly increasing in community-based development, the authors offer a global exploration of the impacts of culturally based development with comparative analysis in countries such as Korea, Ireland, and the United States. A must-read for community development planners, policymakers, students, and researchers.

Exploring the Dimensional Structure of the Arts in Communities By HeeKyung Sung, Roland J. Kushner, & Mark A. Hager

Traditions and Play as Ways to Develop Community: The Case of Korea’s Belt-Wrestling Known as Ssireum By Christopher A. Sparks

Irish Diaspora and Sporting Cultures of Conflict, Stability and Unity: Analysing the Power Politics of Community Development, Resistance and Disempowerment Through a Case Study Comparison of Benny Lynch and ‘The Glasgow Effect’ By John Davis & Christina Milarvie Quarrell

Chapter 7 Tradition, Cultures and Communities: Exploring the Potentials of Music and the Arts for Community Development in Appalachia By Brian McGrath & M.A. Brennan

Rhonda Phillips, Ph.D., FAICP is a community development and planning specialist. Her first book, Concept Marketing for Communities, profiled towns using innovative branding strategies for arts-based development. She’s presented arts-based development workshops across the US and globally as a Fulbright Scholar and with a US AID project. Rhonda is Professor and Dean, Purdue University and author/editor of 26 books on community development and related topics. She is a member of the American Institute of Certified Planners College of Fellows.

Mark A. Brennan is Professor, Leadership and Community Development and UNESCO Chair in Community, Leadership, and Youth Development at the Pennsylvania State University. Dr. Brennan’s teaching, research, writing, and program development concentrates on the role of civic engagement in the youth, community, and rural development process. He has over 25 years’ experience designing, conducting, and analyzing social science research related to community and development.

Tingxuan Li is an Assistant Professor in the Graduate School of Education at Shanghai Jiao Tong University. Tina earned her Ph.D. in 2019 from the College of Education at Purdue University. At Purdue, she was a key personnel on multiple projects funded by the National Science Foundation as well as a member of Dr. Rhonda Phillips’s research group. Tina was born and raised in Inner Mongolia Autonomous Region, China.