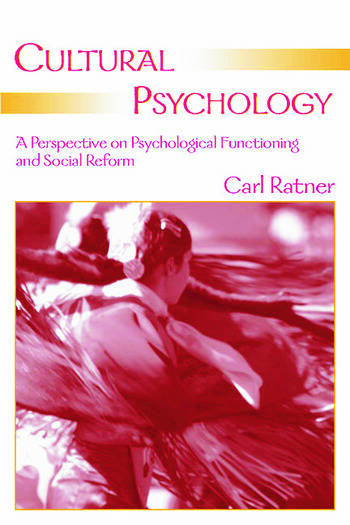 Cultural Psychology: A Perspective on Psychological Functioning and Social Reform

Intended for students, researchers, and practitioners in psychology, education, psychotherapy, history, sociology, anthropology, linguistics, philosophy, and policy makers and practitioners in public health and social service who are interested in understanding cultural aspects of psychology. The book is an appropriate text for courses in cross-cultural or community psychology, social work, social theory, and critical thinking.

"This is a very important book. Its message is that psychology gives inadequate attention to culture, especially macroculture. Ratner's critiques of different approaches to psychology are excellent. This is a great book."
—PsycCRITIQUES

"The book is very timely in the contemporary context of developing cultural psychology…engaging, substantive, and at times provocative."

"A timely and urgently needed contribution to the field of psychology...a unified, coherent text on cultural psychology."

Cultural Psychology: A Perspective on Psychological Functioning and Social Reform