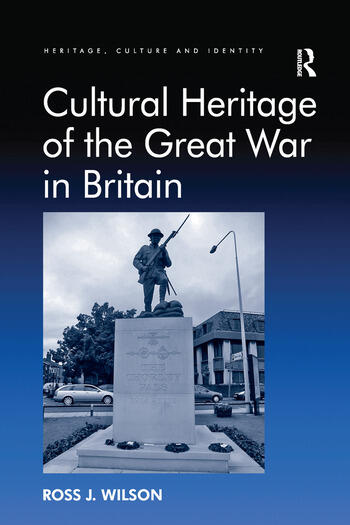 Cultural Heritage of the Great War in Britain

As the hundredth anniversary approaches, it is timely to reflect not only upon the Great War itself and on the memorials which were erected to ensure it did not slip from national consciousness, but also to reflect upon its rich and substantial cultural legacy. This book examines the heritage of the Great War in contemporary Britain. It addresses how the war maintains a place and value within British society through the usage of phrases, references, metaphors and imagery within popular, media, heritage and political discourse. Whilst the representation of the war within historiography, literature, art, television and film has been examined by scholars seeking to understand the origins of the 'popular memory' of the conflict, these analyses have neglected how and why wider popular debate draws upon a war fought nearly a century ago to express ideas about identity, place and politics. By examining the history, usage and meanings of references to the Great War within local and national newspapers, historical societies, political publications and manifestos, the heritage sector, popular expressions, blogs and internet chat rooms, an analysis of the discourses which structure the remembrance of the war can be created. The book acknowledges the diversity within Britain as different regional and national identities draw upon the war as a means of expression. Whilst utilising the substantial field of heritage studies, this book puts forward a new methodology for assessing cultural heritage and creates an original perspective on the place of the Great War across contemporary British society.

'Well researched and written, the book will appeal to those interested in historical memory and how it affects contemporary politics. ... Recommended.' Choice ’Anyone working within the fields of heritage and memory will be challenged to think again about the remembrance of war after reading this historically-informed and theoretically sophisticated volume. Elegantly written, it delivers a much-needed analysis of the ways in which the Great War is brought to mind in popular parlance, media discourse and wider cultural representations.' Emma Waterton, University of Western Sydney, Australia ’In this thoroughly researched work, Wilson examines through verbal and visual frames -such as slangs, sayings, imagery, myths, monuments and museums - the tangible� and intangible� cultural heritage of the conflict within contemporary Britain and its powerful presence within public consciousness�. This is an excellent read for anthropologists, heritage theorists and public historians.’ Kalliopi Fouseki, University College London, UK ’This book is a major contribution to both heritage and memory studies, and offers a scholarly and nuanced examination of the uses of the material and intangible heritage of the Great War within Britain. The work offers an eclectic and novel analysis of the myriad ways in which the heritage and public memory of the War are mobilised to negotiate and legitimate cultural and social values, identity, emotions and particular readings of history and the past. As Wilson elegantly and convincingly demonstrates, the memory and heritage of the Great War is a dynamic cultural tool, employed to both uphold and challenge contemporary understandings of British citizenship and national and community identity. Although focusing on the War the book offers a theoretically sophisticated analysis of heritage, and the way it is used, that has relevance for critical debates within heritage, museum and memory studies. Ross Wilson has shown himself

Cultural Heritage of the Great War in Britain