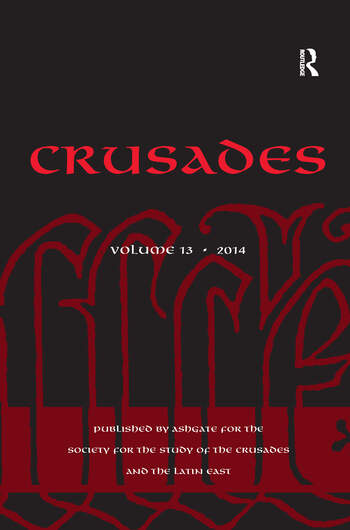 Crusades covers seven hundred years from the First Crusade (1095-1102) to the fall of Malta (1798) and draws together scholars working on theatres of war, their home fronts and settlements from the Baltic to Africa and from Spain to the Near East and on theology, law, literature, art, numismatics and economic, social, political and military history. Routledge publishes this journal for The Society for the Study of the Crusades and the Latin East. Particular attention is given to the publication of historical sources in all relevant languages - narrative, homiletic and documentary - in trustworthy editions, but studies and interpretative essays are welcomed too. Crusades appears in both print and online editions.

Contents: Articles: The 'schism' of 1054 and the First Crusade, Jonathan Harris; The Gesta Francorum Iherusalem expugnantium of 'Bartolf of Nangis', Susan B. Edgington; The Jerusalem conquest of 492/1099 in the medieval Arabic historiography of the Crusades: from regional plurality to Islamic narrative, Konrad Hirschler; Geoffrey, prior of the Templum Domini, On the Seven Books of Josephus, Julian Yolles; Irish involvement in the First and Second Crusades? A reconsideration of the eleventh- and twelfth-century evidence, Denis Casey; The German Crusade of 1197-1198, Graham A. Loud; Burchard of Mount Sion's Descriptio Terrae Sanctae: a newly discovered extended version, Jonathan Rubin; A templar's belt: the oral and sartorial transmission of memory and myth in the Order of the Temple, Kevin James Lewis; Pergamene messinesi due-trecentesche relative all'Oriente latino, Bruno Figliuolo; Humbert of Viennois and the Crusade of Smyrna: a reconsideration, Mike Carr. Reviews; Short notices; Bulletin no. 34 of the SSCLE.