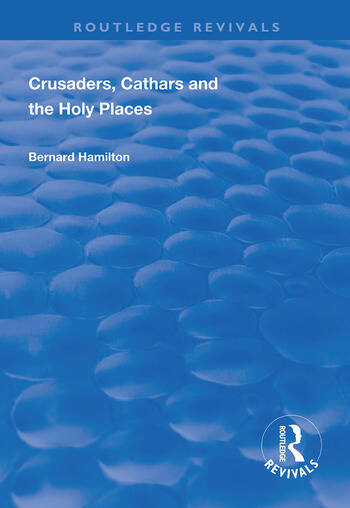 Crusaders, Cathars and the Holy Places

First published in 1999, this volume emerged as part of the Collected Studies series and features studies authored by Bernard Hamilton over a period of twenty years, all of which deal with relations between Western Europe and the neighbouring civilizations in the Eastern Mediterranean during the 12th and 13th centuries. The first set examines the kind of society which developed in the Crusader States (including three essays on women and Queens), and the attitude of western settlers to the Byzantine Empire, eastern Christian churches and the Islamic world. Further essays deal with the impact on Western Europe of Christian dualist heresy which had its roots in the Balkans and Armenia, and perhaps ultimately in Persia. The final group centres around the Holy Places, whose liberation was the raison d’etre of the crusade movement. They examine how the Western Church administered these shrines, the way in which they shaped western piety during the time of crusader rule, and how the cult of the Holy Places developed in the Western Church after they had been recaptured by Islam. Each article’s original citation information is included, along with the original page numbers and pagination.

Part 1. Crusaders: Kings, Queens and Regents. 1. Women in the Crusader States: the Queens of Jerusalem, 110-1190. Medieval Women, ed. D. Baker. Oxford, 1978. 2. King Consorts of Jerusalem and their Entourages from the West from 1186 to 1250. Die Kreuzfahrerstaaten als multikulturelle Gesellschaft, ed. H.E. Mayer, Schriften des Historischen Kollegs Kolloquien 37. Munich, 1997. 3. Miles of Plancy and the Fief of Beirut. The Horns of Hattin. Proceedings of the Second International Congress of the Society for the Study of the Crusades and the Latin Least, ed. B.Z. Kedar. Jerusalem, 1992. 4. The Titular Nobility of the Latin East: the Case of Agnes of Courtenay. Crusade and Settlement, ed. P.W. Edbury. Cardiff, 1985. 5. Manuel I Comnenus and Baldwin IV of Jerusalem. Kathegetria. Essays Presented to Joan Hussey for her 80th Birthday. Ed. J. Chrysostomides. Camberley, 1988. 6. Eleanor of Castile and the Crusading Movement. Intercultural Contacts in the Medieval Mediterranean, ed. B. Arbel. London, 1996. Part 2. Crusaders: Churchmen. 7. Ralph of Domfront, Patriarch of Antioch (1135-40). Nottingham Medieval Studies 28. Nottingham, 1984. 8. Aimery of Limoges, Patriarch of Antioch: Ecumenist, Scholar and Patron of Hermits. The Joy of Learning and the Love of God: Studies in Honor of Jean Leclercq, ed. E.R. Elder, Cistercian Studies 160. Kalamazoo, 1995. 9. The Latin Church in the Crusader States. East and West in the Crusader States: Context – Contacts – Confrontations, ed. A. Davids and H. Teule, Orientalia Lovaniensia Analecta 75. Leuven, 1996. 10. A Medieval Urban Church: the Case of the Crusader States. Studies in Church History 16. Birmingham, 1979. Part 3. Crusaders: Attitudes to Islam. 11. Knowing the Enemy: Western Understanding of Islam at the Time of the Crusades. Journal of the Royal Asiatic Society 3rd series 7. Cambridge, 1997. Part 4. Cathars. 12. The Cathars and the Seven Churches of Asia. Byzantium and the West c. 850 -c. 1200. Ed. J. Howard-Johnstone. Amsterdam, 1988. 13. Wisdom from the East: the Reception among the Cathars of Eastern Dualist Texts. Heresy and Literacy, c. 1000-1530, ed. P. Biller and A. Hudson. Cambridge, 1994. 14. Catholic Perceptions of East European Dualism in the Twelfth and Thirteenth Centuries. A Paper given to a Confeerence on ‘Heresy in Eastern Europe’ at the School of Slavonic and East European Studies of the University of London in July 1994. Previously unpublished. Part 5. The Holy Places. 15. The Impact of Crusader Jerusalem on Western Christendom. The Catholic Historical Review 80. Washington DC, 1994. 16. Ideals of Holiness: Crusaders, Contemplatives and Mendicants. Special Issue of The International History Review, dedicated to ‘Essays Commemorating the 900th Anniversary of the Proclamation of the First Crusade’, 17 (4). Burnaby, 1995. 17. The Ottomans, the Humanists and the Holy House of Loreto. Renaissance and Modern Studies, in a special issue on ‘Christianity and Islam’, 31. Nottingham, 1987.

'...(a) substantial collection likely to open up new channels of research.' Revue d'Histoire Ecclésiastique 'At a time when undergraduate classes are ever larger and many university libraries...no longer bind their periodicals, Variorum's familiar single-author collections offer a useful service... Scholarship of this quality is worth preserving...' History

Crusaders, Cathars and the Holy Places