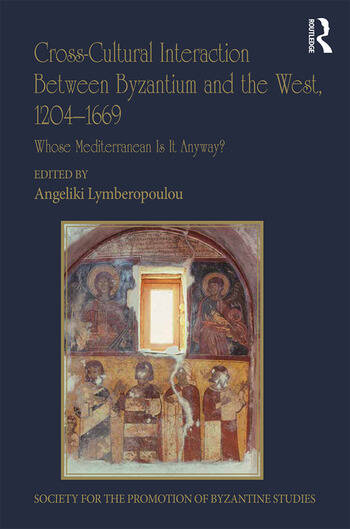 Cross-Cultural Interaction Between Byzantium and the West, 1204–1669: Whose Mediterranean Is It Anyway?

The early modern Mediterranean was an area where many different rich cultural traditions came in contact with each other, and were often forced to co-exist, frequently learning to reap the benefits of co-operation. Orthodox, Roman Catholics, Muslims, Jews, and their interactions all contributed significantly to the cultural development of modern Europe. The aim of this volume is to address, explore, re-examine and re-interpret one specific aspect of this cross-cultural interaction in the Mediterranean – that between the Byzantine East and the (mainly Italian) West. The investigation of this interaction has become increasingly popular in the past few decades, not least due to the relevance it has for cultural exchanges in our present-day society.

The starting point is provided by the fall of Constantinople to the troops of the Fourth Crusade in 1204. In the aftermath of the fall, a number of Byzantine territories came under prolonged Latin occupation, an occupation that forced Greeks and Latins to adapt their life socially and religiously to the new status quo. Venetian Crete developed one of the most fertile ‘bi-cultural’ societies, which evolved over 458 years. Its fall to the Ottoman Turks in 1669 marked the end of an era and was hence chosen as the end point for the conference. By sampling case studies from the most representative areas where this interaction took place, the volume highlights the process as well as the significance of its cultural development.

2. Byzantium and the West: evidence from Crete

2b. Aspects of Artistic Exchange on Crete: Remarks and Question Marks concerning the Presence of Venetian Painters on the Island in the fourteenth and fifteenth centuries (Maria Constantoudaki-Kitromilides)

2c. The Fogg Triptych: Testimony of a Case Study to the Society and its Artistic Production in Venetian Crete (Angeliki Lymberopoulou)

2d. Artistic Interactions between Byzantium and Italy in the Palaiologan Era: the Case of Hell (Rembrandt Duits)

3. Byzantium and the West: evidence from Cyprus

3b. Giotto’s Quadrilobes: Transmigrations of Italianate Ornaments in the Eastern Mediterranean (Michele Bacci)

3c. East is East and West is West? Artistic Interchange across Frontiers in the Eastern Mediterranean (Ioanna Christoforaki)

4. Byzantium and the West: evidence from the Peloponnese

4a. Between East and West: Locating Monumental paintings from the Peloponnese (Sharon E.J. Gerstel and Michalis Kappas)

4b. The Elephant on the Page: Ciriaco d’Ancona in Mystras (Andrea Mattiello)

5. Byzantium and the West: evidence from the wider Mediterranean

5a. Space, Place and Culture: Processions across the Mediterranean (Leslie Brubaker)

5e. Epeiros between Byzantium and the West in the Thirteenth and Early Fourteenth Centuries: Visual Evidence (Leonela Fundić)

5f. The Fate of Bells under Ottoman Rule: Between Destruction and Negotiation (Alex Rodriguez Suarez)

Angeliki Lymberopoulou is Senior Lecturer in Art History (late and post-Byzantine art) at The Open University, UK. Her research interests focus on Venetian Crete (1211–1669) and the cross-cultural interactions and exchanges between Greek Orthodox and Roman Catholic Christians in the wider Mediterranean. She also examines Palaiologan Byzantine art produced in the major artistic centres during the last phase of the Empire – Constantinople, Thessaloniki and Mystras. She is the author of The Church of the Archangel Michael at Kavalariana: Art and Society on Fourteenth-Century Venetian-Dominated Crete (London, 2006) and co-editor (with Rembrandt Duits) of Byzantine Art and Renaissance Europe (Farnham, 2013).

Cross-Cultural Interaction Between Byzantium and the West, 1204–1669: Whose Mediterranean Is It Anyway?