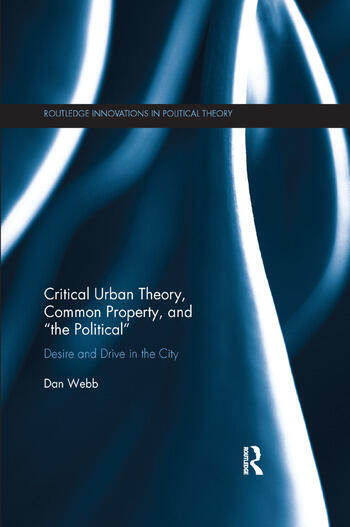 Critical Urban Theory, Common Property, and “the Political”: Desire and Drive in the City

Dan Webb explores an undervalued topic in the formal discipline of Political Theory (and political science, more broadly): the urban as a level of political analysis and political struggles in urban space. Because the city and urban space is so prominent in other critical disciplines, most notably, geography and sociology, a driving question of the book is: what kind of distinct contribution can political theory make to the already existing critical urban literature? The answer is to be found in what Webb calls the "properly political" approach to understanding political conflict as developed in the work of thinkers like Chantal Mouffe, Jodi Dean, and Slavoj Žižek. This "properly political" analysis is contrasted with and a curative to the predominant "ethical" or "post-political" understanding of the urban found in so much of the geographical and sociological critical urban theory literature. In order to illustrate this primary theoretical argument of the book, Webb suggests that "common property" is the most useful category for conceiving the city as a site of the "properly political." When the city and urban space are framed within this theoretical framework, critical urbanists are provided a powerful tool for understanding urban political struggles, in particular, anti-gentrification movements in the inner city.

1. Validating the City in Political Theory

2. Post-Politics and the Ethical Turn in Political Theory

3. Ethics as a Symptom of Late Capitalism

4. The Open City, or the Ethical Turn in Critical Urban Studies

5. Gentrification and the Dromocratic City

6. Common Property and the Politicization of Urban Space

Dr. Dan Webb has a PhD in Political Science from the University of Alberta and is an occasional member of the avant-garde academic circle known as the "Edmonton School." He is an independent scholar, author, and aspiring documentary film-maker based in Port Alberni, BC. When he’s not reading iconoclastic leftist political theory, he’s most likely surfing off the west coast of Vancouver Island or watching Lars Von Trier movies with his wife, Lisa.

"In this extraordinary book, Lacanian Psychoanalysis meets political theory in the streets of the city. The necessity of a radical political theory of the urban is explored with exquisite clarity and unwavering commitment to progressive change. If there is any hope for a different and politicized urbanity, it begins to shimmer between the covers of Dan Webb’s book." - Erik Swyngedouw, Professor of Geography, The University of Manchester

Critical Urban Theory, Common Property, and “the Political”: Desire and Drive in the City