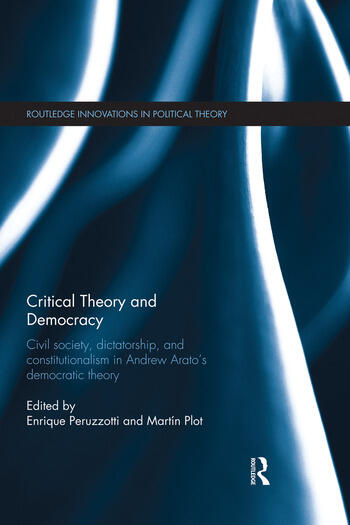 This book focuses on Andrew Arato’s democratic theory and its relevance to contemporary issues such as processes of democratization, civil society, constitution-making, and the modern Executive.

Andrew Arato is -both globally and disciplinarily- a prominent thinker in the fields of democratic theory, constitutional law, and comparative politics, influencing several generations of scholars. This is the first volume to systematically address his democratic theory. Including contributions from leading scholars such as Dick Howard, Ulrich Preuss, Hubertus Buchstein, Janos Kis, Uri Ram, Leonardo Avritzer, Carlos de la Torre, and Nicolás Lynch, this book is organized around three major areas of Arato´s influence on contemporary political and social thought. The first section offers a comprehensive view of Arato’s scholarship from his early work on critical theory and Western Marxism to his current research on constitution-making and its application. The second section shifts its focus from the previous, comprehensive approach, to a much more specific one: Arato´s widespread influence on the study of civil society in democratization processes in Latin America. The third section includes a previously unpublished work, ‘A conceptual history of dictatorship (and its rivals,)’ one of the few systematic interrogations on the meaning of a political form of fundamental relevance in the contemporary world.

will be of interest to critical and social theorists, and all Arato scholars.

Enrique Peruzzotti is researcher of CONICET, Associate Professor at the Department of Political Science and International Studies, Di Tella University and a John Simon Guggenheim Fellow (2009-10). He has been awarded fellowships from the Woodrow Wilson Center, Fulbright, the Rockefeller Foundation, LSE, The National Endowment for Democracy, UNRISD, University of New Mexico and the University of London. He was a visiting professor at the American University in Paris, FLACSO Ecuador, Cornell University, Universidad Nacional de Rosario, and the Universidad Federal do Minas Gerais. He has published extensively on Latin American politics, civil society and democratization process.

Martín Plot (Ph.D., New School for Social Research, 2004 – Alfred Schutz Memorial Award in Philosophy and Sociology) teaches and conducts research at the Aesthetics & Politics Program, School of Critical Studies, CalArts. He is the author of Indivisible (2011), La Carne de lo Social (2008), and El Kitsch Político (2003). He has also edited and co-edited several books and published in Continental Philosophy Review, Constellations, Theory and Event, Umbrales, International Journal of Communication, Le monde diplomatique, Punto de vista, among other journals and reviews. In the of Spring 2012 he was awarded the RAICES Grant and was a Visiting Professor in his native Buenos Aires, at the Institute of Advanced Social Studies (IDAES-UNSAM.) He works in the fields of political and social theory and conducts research and writes on American and Latin American political culture and democratic politics.