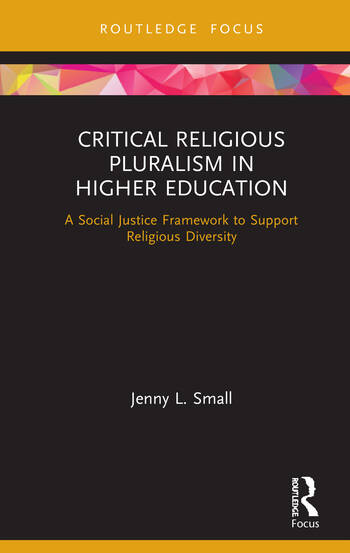 This text presents a new critical theory addressing religious diversity, Christian religious privilege, and Christian hegemony in the United States. It meets a growing and urgent need in our society—the need to bring together religiously diverse ways of thinking and being in the world, and eventually to transform our society through intentional pluralism.

The primary goal of Critical Religious Pluralism Theory (CRPT) is to acknowledge the central roles of religious privilege, oppression, hegemony, and marginalization in maintaining inequality between Christians and non-Christians (including the nonreligious) in the United States. Following analysis of current literature on religious, secular, and spiritual identities within higher education, and in-depth discussion of critical theories on other identity elements, the text presents seven tenets of CRPT alongside seven practical guidelines for utilizing the theory to combat the very inequalities it exposes. For the first time, a critical theory will address directly the social impacts of religious diversity and its inherent benefits and complications in the United States.

will appeal to scholars, researchers, and graduate students in higher education, as well as critical theorists from other disciplines.

Jenny L. Small is an independent scholar, teacher, and facilitator on the topics of religious pluralism and college student worldviews. She also serves as the Director of Communications at Convergence. She holds a Ph.D. in Higher Education from the University of Michigan, USA.

Recognizing that there are substantial inconsistencies in research and practice for a comprehensive critical analysis of how Christian privilege can colonize and oppress those who do not identify as Christian, Small adeptly shows how critical theory can provide the depth and breadth needed to transcend religious pluralism’s limitations in addressing the issues of power within the social and cultural order. More than just a synthesis of critical theory and religious pluralism, Critical Religious Pluralism Theory (CRPT) challenges moral relativism, the myth of secularism as neutral, and the intolerant religious views of others, while arguing that the "strongest believers in a particular religious faith" can be advocates of pluralism. Although Small concedes that this work, which is directed toward those in the higher education setting is only a starting point for CRPT, the implications of its powerful message can be used to change the broader "society along this axis of inequality" so that its application can "build a more just, moral, and inclusive society…."