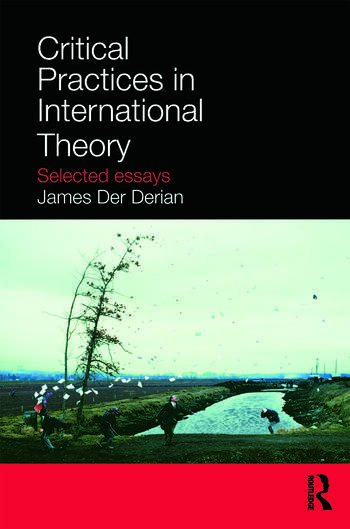 Critical Practices in International Theory brings together for the first time the essays of the leading IR theorist, James Der Derian. The essays cover a variety of issues central to Der Derian's work including diplomacy, alienation, terrorism, intelligence, national security, new forms of warfare, the role of information technology in international relations, poststructuralist theory, and the military-entertainment-media matrix.

The book includes a framing introduction written for this volume in which Der Derian provides historical and theoretical context for a diverse body of work. Discussing his own influences and reflecting upon the development of international theory, he advocates a critical pluralist approach to the most pressing problems of world politics.

James Der Derian is a Watson Institute research professor of international studies at Brown University, where he directs the Global Security Program and the Global Media Project. He is the author of many articles and books, including the highly acclaimed Virtuous War (2001, 2009).

Introduction  1. Mediating Estrangement: A Theory for Diplomacy Review of International Studies  2. Arms, Hostages and the Importance of Shredding in Earnest: Reading the National Security Culture  3. The (S)pace of International Relations: Simulation, Surveillance and Speed  4. Narco-Terrorism at Home and Abroad  5. The Terrorist Discourse: Signs, States, and Systems of Global Political Violence  6. S/N: International Theory, Balkanisation, and the New World Order  7. Cyberwar, Videogames, and the Gulf War Syndrome  8. Act IV: Fathers (and Sons), Mother Courage (and Her Children), and the Dog, the Cave and the Beef  9. The Value of Security: Hobbes, Marx, Nietzsche and Baudrillard  10. The C.I.A., Hollywood, and Sovereign Conspiracies  11. Great Men, Monumental History, and Not-So-Grand Theory: A Meta-Review of Henry Kissinger’s Diplomacy  12. Post-Theory: The Eternal Return of Ethics in International Relations  13. Cyber-Deterrence  14. Global Swarming, Virtual Security, and Bosnia  15. The Simulation Triangle  16. Virtuous War and Hollywood  17. Virtuous War/Virtual Theory  18. The Illusion of a Grand Strategy  19. In Terrorem: Before and After 9/11  20. The Question of Information Technology in International Relations  21. Hedley Bull and the Case for a Post-Classical Approach

James Der Derian is Research Professor of International Studies at Brown University, where he directs the Innovating Global Security and Global Media Project at the Watson Institute for International Studies. He has produced numerous books, articles, and documentaries on diplomacy, war, media, and technology, including, most recently, Virtuous War: Mapping the Military-Industrial-Media-Entertainment Network (Routledge, 2009)