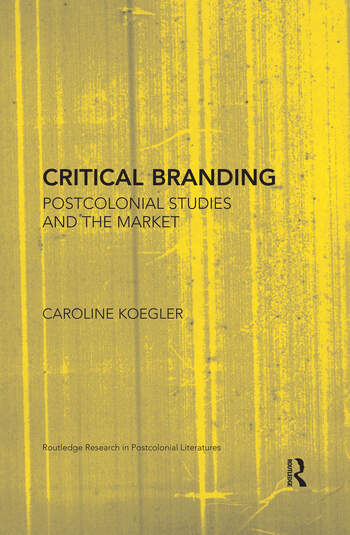 provides an original answer to what Sarah Brouillette has called postcolonial studies’ ‘longstanding materialist challenge’, illuminating the relationship between what is often broadly called ‘the market’ and the practice and positionality of postcolonial critics and their field, postcolonial studies. After much attention has been paid to the status of literary writers in markets, and after a range of sweeping attacks against the field for its alleged ‘complicity’ with capitalism, this study takes the crucial step of systematically exploring the engagement of postcolonial critics in market practice, substituting an automatic sense of accusation (Dirlik), dread (Westall; Brouillette), rage (Young; Williams), or irony (Huggan; Ponzanesi; Mendes) with a nuanced exploration and critique. Bringing together concepts from business studies, postcolonial studies, queer studies, and literary and cultural studies in an informed way, Critical Branding sets on a thorough theoretical footing a range of categories that, while increasingly current, remain surprisingly obscure, such as the market, market forces, and branding. It also provides new concepts with which to think the market as a dimension of practice, such as brand narratives, brand acts, and brand politics. At a time when the marketisation of the university system and the resulting effects on academics are much on our minds, Critical Branding is a timely contribution that explores how diversely postcolonial studies and the market intersect, for better and for worse.

4 The Brand Becomes the Product: Transformation

6 If You Don’t Brand Postcolonialism, Someone Else Will

7 Anti-capitalism as a Brand Narrative

A Conclusion in Five Brand Acts

is Assistant Professor of English at the University of Muenster, Germany. Holding degrees in both Literary and Cultural Studies and Business Management, she has published on refugees and the politics of performing the urban, Caribbean literature, queer sexualities/positionalities, Judith Butler, postcolonial intertextuality, the financial crisis, and the market and ideology in Postcolonial Studies (forthcoming). She is co-editor of Locating African European Studies: Interventions-Intersections-conversations (forthcoming).