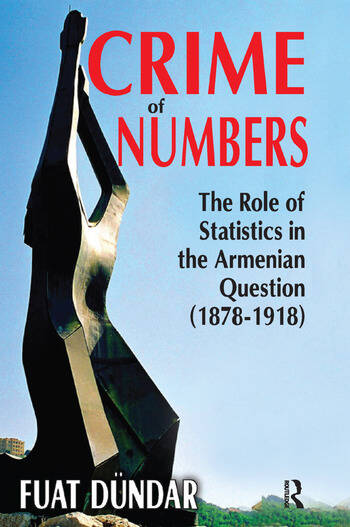 Crime of Numbers: The Role of Statistics in the Armenian Question (1878-1918)

Statistics have played an important role in the recognition of the Armenian question on the international landscape as well as its "definitive solution" resulting in the Armenian genocide. The importance of statistics first surfaced at the Congress of Berlin in 1878, where differences in the approach toward numbers between the Armenian and the Ottoman Empire, and the role of statistics within the Ottoman state apparatus, became an issue. At that international gathering, the Armenian question was considered part of the "Eastern Question" paradigm of Western diplomacy. It would soon become a code word for the question of "civilization" itself.

Those administering the multi-ethnic Ottoman Empire perceived the Armenian issue not only through ethnic and religious perspectives, but also through statistics. As Dundar shows, statistics became the vehicle through which the Ottoman state apparatus was forced to include non-Muslim populations of the Empire in the state apparatuses and local councils. This occurred long before the Armenian question surfaced. The aim of Ottoman reforms was to ensure that all communities participated in the affairs of the state and that such participation was proportionate to their numbers. Through its role in these reforms, statistics emerged as a constant matter of debate in the Armenian question.

As a result of the Armenian genocide, the statistical record has become quite sensitive. Today, accounting for the numbers of Armenians murdered in 1915 usually means calculating the number of Armenians who were massacred or died of other causes such as disease, hunger, exhaustion, and the like during deportations or immediately after. This is a work of brilliant archival history and imaginatively uses social statistics.

Abbreviations
Preface
Introduction
1 Diplomacy and Statistics: The Emergence of the Armenian Question (1878-1913)
First Period: The Congress of Berlin and the Emergence of the Armenian Question, 1878
Second Period: The 1895 Memorandum
Third Period: "Vilayat-i arkiyye Islahat," Reform of the Oriental Provinces, in 1914
2 War, Massacre, and Statistics (1914-1918): The "Definitive Solution" of the Armenian Question
Political Persecution
Deportation, the Suez Canal Operation, and the Persecution of Deserters in Zeytun
Massacres: The Van Resistance/Rebellion and Further Deportations
July 20, 1915: Secret Order Concerning Counting and Mapping
Dispersing Armenians according to the Principle of 2%, 5%, and 10%
Photographing Armenians, Covering the Massacres: The Construction of an Offi cial Ideology
3 The Number in the Crime: Counting the Armenian Dead
4 Some Remarks
Appendices
Bibliography
Index

Crime of Numbers: The Role of Statistics in the Armenian Question (1878-1918)