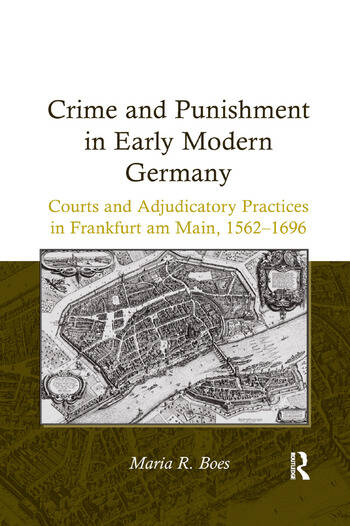 Crime and Punishment in Early Modern Germany: Courts and Adjudicatory Practices in Frankfurt am Main, 1562–1696

Frankfurt am Main, in common with other imperial German cities, enjoyed a large degree of legal autonomy during the early modern period, and produced a unique and rich body of criminal archives. In particular, Frankfurt’s Strafenbuch, which records all criminal sentences between 1562 and 1696, provides a fascinating insight into contemporary penal trends. Drawing on this and other rich resources, Dr. Boes reveals shifting and fluid attitudes towards crime and punishment and how these were conditioned by issues of gender, class, and social standing within the city’s establishment. She attributes a significant role in this process to the steady proliferation of municipal advocates, jurists trained in Roman Law, who wielded growing legal and penal prerogatives. Over the course of the book, it is demonstrated how the courts took an increasingly hard line with select groups of people accused of criminal behavior, and the open manner with which advocates exercised cultural, religious, racial, gender, and sexual-orientation repressions. Parallel with this, however, is identified a trend of marked leniency towards soldiers who enjoyed an increasingly privileged place within the judicial system. In light of this discrepancy between the treatment of civilians and soldiers, the advocates’ actions highlight the emergence and spread of a distinct military judicial culture and Frankfurt’s city council’s contribution to the quasi-militarization of a civilian court. By highlighting the polarized and changing ways the courts dealt with civilian and military criminals, a fuller picture is presented not just of Frankfurt’s sentencing and penal practices, but of broader attitudes within early modern Germany to issues of social position and cultural identity.

Dr. Maria R. Boes is Professor Emerita of West Chester University, Pennsylvania. She is the author of numerous articles and book chapters on Early Modern Germany.

'... I strongly recommend this book to readers interested in mechanisms of social discipline and criminal prosecution, religious persecution and toleration, and gender and sexuality in early modern Germany. Boes’s careful archival research brings to life complicated and intimate stories from sixteenth- and seventeenth-century Frankfurt that speak to each of these topics in important ways.' Renaissance Quarterly '... Boes's Crime and Punishment provides many interesting case studies and good insight into early modern Germany's criminal practices related to minorities and marginalized social groups.' Sixteenth Century Journal 'The book's main strength is in its detailed accounts of individual cases, which offer potential insights into both social history and legal thinking. Her cases on Gypsies offer interesting evidence on their uses of language and their interactions with the Christian community.' German History

Crime and Punishment in Early Modern Germany: Courts and Adjudicatory Practices in Frankfurt am Main, 1562–1696