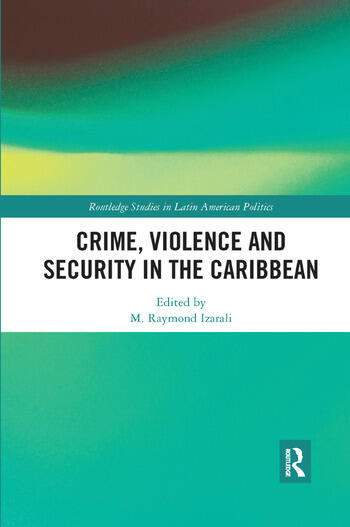 Crime, Violence and Security in the Caribbean

Security challenges pose significant hardship for citizens of Caribbean nations. Public safety is threatened by high rates of crime – especially violent crime – in much of the region, the plague of the illicit drug trade, transnational organized crime, gangs, the current global proliferation of crimes of terrorism and related violent extremism and radicalization. The situation diminishes morale among the youth, their education and their future, and operates as a major push factor.

Yet, surprisingly, there has been a scarcity of scholarly work that addresses these conditions.  This interdisciplinary volume succinctly responds to the gap in criminological and security studies on the Caribbean by drawing attention to the understudied nexus of crime, violence, and security that is so pervasive in the region, and the ways in which underdevelopment re/creates environments for insecurity.

The book is organized in three parts:

This timely volume will be valuable reading for scholars, students, practitioners and policy makers who share a critical interest in the scope, impact, and inter-relationality of crime, violence, and in/security in the region.

1. Crime, Violence, and Public Safety in the Caribbean

2. Drug Trafficking and Gang Violence in the Caribbean

3. Exploring the Link Between Corruption and the Rule of Law in Five Caribbean Countries

4. Prisons in the Caribbean: Structures, Conditions and Effectiveness

5. The Torture of Inner City Boys and its Contribution to the Construction of Repeat Killers in Jamaica

6. Risk and Fear of Crime Paradoxes in Trinidad

8. An Emerging Regional Power: Trinidad and Tobago’s Role and Influence on Caribbean Security

9. Private Security in the Caribbean

10. Vulnerabilities and Security Threats in the Caribbean

11. The Caribbean in Current Global Security Affairs: The Issue of Terrorism

Crime, Violence and Security in the Caribbean