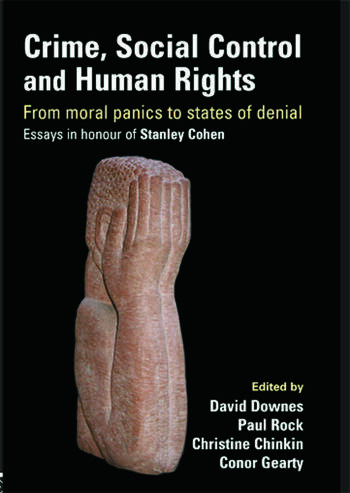 Crime, Social Control and Human Rights: From Moral Panics to States of Denial, Essays in Honour of Stanley Cohen

The work of Stanley Cohen over four decades has come to acquire a classical status in the fields of criminology, sociology and human rights. His writing, research, teaching and practical engagement in these fields have been at once rigorously analytical and intellectually inspiring. It amounts to a unique contribution, immensely varied yet with several unifying themes, and it has made, and continues to make, a lasting impact around the world. His work thus has a protean character and scope which transcend time and place.

This book of essays in Stanley Cohen's honour aims to build on and reflect some of his many-sided contributions. It contains chapters by some of the world's leading thinkers as well as the rising generation of scholars and practitioners whose approach has been shaped in significant respects by his own.

Foreword by Noam Chomsky  Introduction  Part 1: Seminal Influences  1. Growing up with Stan, Adam Kuper  2. The art of exile: a study of Alexander Herzen, Richard Sennett  3. The other side of the street: an interview with Stan Cohen, Laurie Taylor  4. How we deal with the people we study: 'The Last Seminar' revisited, Howard Becker  Part 2: Gradations of Social Control: From Moral Panics to Long-term Imprisonment  5. Folk Devils and Moral Panics: an appreciation from North America, Malcolm M. Feeley and Jonathan Simon  6. Slipping away - moral panics each side of 'The Golden Age', Jock Young  7. Sexual offenders and the path to a purified domain, Andrew Rutherford  8. Hassles and worse, Harvey Molotch  9. Moral panic, denial and human rights: scanning the spectrum from overreaction to underreaction, Michael Welch  Part 3: The Extremities of Control: Torture and the Death Penalty  10. The power to classify: avenues into a supermax prison, Sharon Shalev  11. The torture debate: Israel and beyond, David Kretzmer  12. Death, denial, discourse: on the forms and functions of American capital punishment, David Garland  Part 4: Visions of Social Control 13. Pathologies of markets and states, Steven Lukes  14. Visions of Social Control revisited, Thomas Blomberg and Carter Hay  15. Governing security: the rise of the privatized military, Tim Newburn  16. The free movement of people: ethical debates before and after '9/11', Robin Cohen  17. Detain - restrain - control: sliding scale or slippery slope? Jill Peay  18. Social control talk/talking about social control: encounters with Stan Cohen and his work, Andrew Scull  Part 5 The Theory and Practice of Denial 19. Denial and responsibility, Nicola Lacey  20. The Israeli human rights movement - lessons from South Africa, Daphna Golan-Agnon  21. Mediterranean poverty and conflict: applying a human rights strategy, Peter Townsend  22. States of acknowledgment: the politics of memory, apology, and therapy, Claire Moon  23. Denial in Cambodia, Margo Picken  24. Does any of this matter? Transitional justice and the Israeli-Palestinian conflict, Ron Dudai  Part 6: Ways Ahead 25. 'I sang in my cell because I wouldn't sing' and other tales, Albie Sachs  26. Restorative justice: answers to deficits in modernity? Nils Christie  27. The flow of boundaries: gays, queers and intimate citizenship, Ken Plummer  28. The fates of solidarity: use and abuse, Fred Halliday  29. Criminology as a vocation, Robert Reiner  30. Conflicts, suffering and the promise of human rights, Ruth Jamieson and Kieran McEvoy

David Downes is Professor Emeritus of Social Administration at the London School of Economics, UK.

Paul Rock is Professor Emeritus of Sociology at the London School of Economics, UK.

Christine Chinkin is Professor of International Law at the London School of Economics, UK. She is an Overseas Affiliated Faculty Member, University of Michigan and has been a Scholar in Residence for Amnesty International (2005).

Conor Gearty is Professor Human Rights Law, and Director of the Centre for the Study of Human Rights at the London School of Economics, UK.

Crime, Social Control and Human Rights: From Moral Panics to States of Denial, Essays in Honour of Stanley Cohen