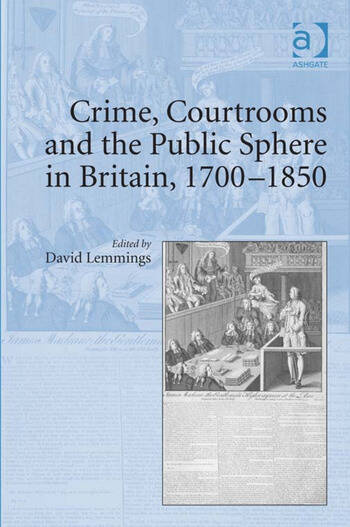 Modern criminal courts are characteristically the domain of lawyers, with trials conducted in an environment of formality and solemnity, where facts are found and legal rules are impartially applied to administer justice. Recent historical scholarship has shown that in England lawyers only began to appear in ordinary criminal trials during the eighteenth century, however, and earlier trials often took place in an atmosphere of noise and disorder, where the behaviour of the crowd - significant body language, meaningful looks, and audible comment - could influence decisively the decisions of jurors and judges. This collection of essays considers this transition from early scenes of popular participation to the much more orderly and professional legal proceedings typical of the nineteenth century, and links this with another important shift, the mushroom growth of popular news and comment about trials and punishments which occurred from the later seventeenth century. It hypothesizes that the popular participation which had been a feature of courtroom proceedings before the mid-eighteenth century was not stifled by ’lawyerization’, but rather partly relocated to the ’public sphere’ of the press, partly because of some changes connected with the work of the lawyers. Ranging from the early 1700s to the mid-nineteenth century, and taking account of criminal justice proceedings in Scotland, as well as England, the essays consider whether pamphlets, newspapers, ballads and crime fiction provided material for critical perceptions of criminal justice proceedings, or alternatively helped to convey the official ’majesty’ intended to legitimize the law. In so doing the volume opens up fascinating vistas upon the cultural history of Britain’s legal system over the ’long eighteenth century'.

'In the final analysis, the significance of Crime, Courtrooms and the Public Sphere in Britain, 1700-1850 is greater than the sum of its parts. Each chapter provides an interesting, well-researched analysis that will undoubtedly be useful to a specialized audience of legal and cultural historians who study the eighteenth and nineteenth centuries. But taken as a whole, the book accomplishes much more than that. It provides a vivid picture of a rising print culture that largely supplanted the physical presence of ordinary folk at criminal trials.' Criminal Law & Criminal Justice Books 'These essays together provide a nuanced assessment of how developments in courtroom culture and court reporting could in some ways offer opportunities for the kind of rational, critical debate typical of the Habermasian public sphere, yet in other ways closed off the space for such discussion. This has important insights for how we understand the law as ideology in the eighteenth and nineteenth centuries.' History 'Overall this is a cohesive collection that substantially accounts for the developing professionalism of trials, changes in attitudes to the courts, the way the workings of the courts were reported to a wider public, and especially the way that the emergence of a professional body of criminal advocates changed not only the conduct of trials but also public perceptions of the legal system.' Parergon 'One of the few areas of historical enquiry that has hitherto remained largely untouched by [JÃ¼rgen] Habermas' work is the history of crime and the courts. This collection helps to rectify this apparent anomaly, and forms a welcome contribution to reconfiguring our understanding of the eighteenth and nineteenth centuries - of modernity.' English Historical Review