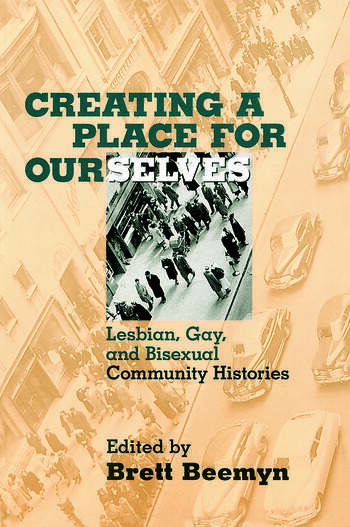 Creating a Place For Ourselves: Lesbian, Gay, and Bisexual Community Histories

Creating a Place For Ourselves is a groundbreaking collection of essays that examines gay life in the United States before Stonewall and the gay liberation movement. Along with examining areas with large gay communities such as New York, San Francisco and Fire Island, the contributors also consider the thriving gay populations in cities like Detroit, Buffalo, Washington, D.C., Birmingham and Flint, demonstrating that gay communities are truly everywhere.

"...essays are fascinatingly researched and engagingly written; the depth of detail here is simply splendid...this collection of essays illuminates how the complicated matrix of gender, race, class (and to some extent mobility, both social and physical) has come into play in the formation of gay, lesbian, and bisexual communities." -- The Lavender Salon Reader
"This rich and varied collection will allow teachers of social history and of the twentieth-century United States to incorporate material on sexual identity more easily into their courses." -- John D'Emilio, The Journal of American History
"The essays in Creating a Place for Ourselves provide important and inspirational building blocks in the ever-expanding field of lesbian, gay, and bisexual community studies." -- Lesbian Review of Books

Creating a Place For Ourselves: Lesbian, Gay, and Bisexual Community Histories