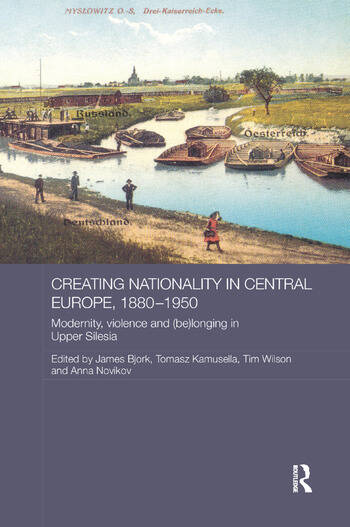 Creating Nationality in Central Europe, 1880-1950: Modernity, Violence and (Be) Longing in Upper Silesia

In the immediate aftermath of the First World War, Upper Silesia was the site of the largest formal exercise in self-determination in European history, the 1921 Plebiscite. This asked the inhabitants of Europe’s second largest industrial region the deceptively straightforward question of whether they preferred to be Germans or Poles, but spectacularly failed to clarify their national identity, demonstrating instead the strength of transnational, regionalist and sub-national allegiances, and of allegiances other than nationality, such as religion. As such Upper Silesia, which was partitioned and re-partitioned between 1922 and 1945, and subjected to Czechization, Germanization, Polonization, forced emigration, expulsion and extermination, illustrates the limits of nation-building projects and nation-building narratives imposed from outside. This book explores a range of topics related to nationality issues in Upper Silesia, putting forward the results of extensive new research. It highlights the flaws at the heart of attempts to shape Europe as homogenously national polities and compares the fate of Upper Silesia with the many other European regions where similar problems occurred.

Introduction: Between the Non-National, the National and (Post-National) Europeanness

1. Upper Silesia in Modern Central Europe: On the Significance of the Non-National in the Age of Nations Tomasz Kamusella

5. Creating a Citizen: Politics and the Education System in the Post-Plebiscite Silesian Voivodeship Anna Novikov

8. Upper Silesia in the age of the ethnically homogenous nation-state, 1945-9 Hugo Service

9. Writing Identity: The Upper Silesian Plebiscite and Uprisings in Historiography and Collective Memories

Tomasz Kamusella is a lecturer at the University of St Andrews, UK.

Timothy Wilson is a lecturer at the University of St Andrews, UK.

Anna Novikov is a research fellow at the Cologne Centre for Central and Eastern Europe, University of Cologne, Germany.

Creating Nationality in Central Europe, 1880-1950: Modernity, Violence and (Be) Longing in Upper Silesia