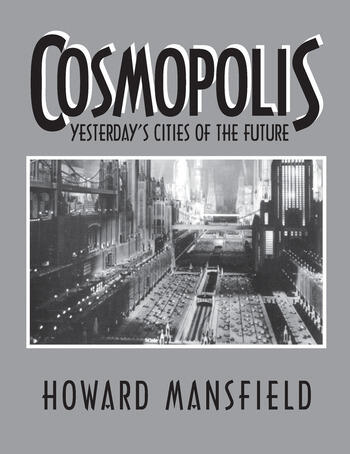 Cosmopolis: Yesterday's Cities of the Future

The twentieth century saw a grand procession of promises for the city. The great modern architect Le Corbusier dictated cities of glittering white towers planted in green parks, Frank Lloyd proposed cities with no downtown, cities spread across the countryside with each family on its homestead, and skyscraper utopians of the 1920s promised paradise on the one-hundredth floor with our airplane hangared next door.

One thing was sure: the city of tomorrow would put to shame the city of yesterday. Another thing was certain, too: we would be happier, more peaceful (and productive) people. Here is Le Corbusier: "Free, man tends to geometry." And if we followed the "radiant harmony" of his geometry, the world’s cities could become "irresistible forces stimulating collective enthusiasm, collective action, and general joy and pride, and inconsequence individual happiness everywhere . . .  the modern world would emerge . . . and would beam around, powerful, happy, believing."

There were others who promised deliverance through their brands of architecture: the right angle, the curvilinear road in the park, the tower of glass. Each fervently preached that his was the magic geometry that, like tumblers on a lock, would open the way to the good life. Cosmopolis is a pattern book of expectations, generously illustrated with a gathering of plans from the City Beautiful to the Italian Futurists, The Cité Industrielle, World’s Fair utopias, science fiction visions, and the grand plans of the Moderns. Cosmopolis is the story of the ideal city we never achieved, and the great plans that went into making-over precincts of our urban language.

The Glories of the Metropolis

To the Sky and Beyond

Howard Mansfield is a writer who specializes in the fields of history, preservation, and architecture. His work has appeared widely in newspapers and professional journals including The New York Times, The Washington Post, and Inland Architect. His books include Skylark: The Life, Lies and Inventions of Harry Atwood and Turn and Jump: How Time and Place Fell Apart.

Cosmopolis: Yesterday's Cities of the Future