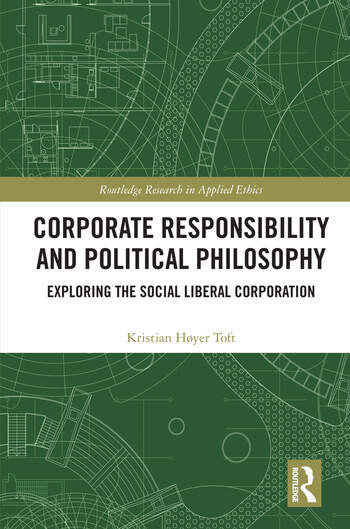 Introduction: Corporations as the Missing Link in Political Philosophy

Part I. The Corporation in Liberalism and Corporate Moral Agency

Chapter 1. The Corporation and Free Markets in Classical Liberalism and its Critics

Chapter 2. Excluding the Corporation from the Political: Rawls and Habermas

Chapter 3. Corporate Moral Agency and Political Theory of the Firm

Chapter 5. Market Liberalism, the Firm and the Market Failures Approach

Chapter 7. Political CSR and the Second Aspect of the Social Liberal Corporation

Chapter 10. Digital and Financial Firms: The Limits of Corporate Responsibility

Chapter 11. Sustainability and Climate Change: The Case for Corporate Environmentalism

Kristian Høyer Toft did his PhD in political philosophy at Aarhus University (2003) and was a visiting scholar in philosophy at Columbia University, the University of Pittsburgh and the University of Reading. He has published articles about climate justice, human rights and corporate responsibility in international journals, e.g. The Business and Human Rights Journal and Energy Research & Social Science. He held positions as a postdoctoral researcher in bioethics at the University of Copenhagen 2006-07), Assistant and Associate Professor at Aalborg University in applied philosophy (2011-2019), and is currently a guest researcher at the Sustainability Centre at the Copenhagen Business School (2020).