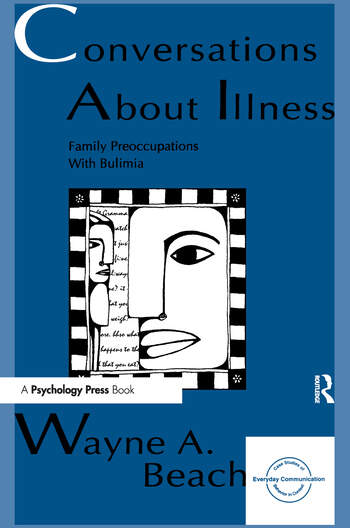 The grandmother granddaughter conversation examined in this book makes explicit what the detailed study of interaction reveals about two social problems--"bulimia" and "grandparent caregiving." For the first time, systematic attention is given to interactional activities through which family members display ordinary yet contradictory concerns about health and illness:
* a grandmother's (who is also a registered nurse) attempts to initiate, confront, and remedy her granddaughter's lack of responsibility in admitting bulimic "problems" and committing to professional medical assistance;
* a granddaughter's methods for avoiding ownership of the alleged bulimic problems by discounting the legitimacy of her grandmother's expressed concerns.

Through analysis of a single audio-recorded and transcribed conversation, Wayne Beach reveals the altogether pervasive and often troubled talk surrounding family medical predicaments. From a careful review of extant theories that seek to explain eating disorders and grandparent caregiving, it becomes clear that an overreliance on self-report data has promoted underspecified understandings of "social contexts" -- conceptualizations void of real time practices and interactional consequences mirroring how families manage their daily affairs and understandings regarding health and illness. In contrast, this volume draws attention to family members' embodied interactional activities. Here it is seen, for example, how methods for expressing concern and caring by individuals may nevertheless eventuate in interactional troubles and problems between family members. The analysis reveals that, while displays of basic concerns for others' health and well being are routine occurrences between family members in home environments -- and of course, across friendship and various support networks -- even the delicate and well-intended management of such occasions guarantees neither agreement on the nature of the alleged "problems" nor, consequently, a commitment to seek professional help as a means of remedying a medical condition. In such cases, the very existence of an illness is itself a matter of some contention to be interactionally worked out. And it is perhaps both predictable and symptomatic that those explicitly denying (or as with the granddaughter, indirectly failing to admit) that problematic health behaviors exist, also somehow let it be made known that far too much attention is being given to possibilities and consequences of illness in the first instance.

Implications of this investigation extend well beyond "bulimia" and "grandparent caregiving" to a vast array of casual and institutional involvements between family members, friends, and bureaucratic representatives such as those involved in long-term caregiving, dealing with cancer and Alzheimer's disease, or conducting psychiatric interviews and HIV/AIDS counseling sessions. Findings regarding the interactionally organized nature of talk about bulimia, as well as the problematic nature of caregiving, will be of value to researchers focusing on language and social interaction, health practitioners, and families alike.

This volume includes the full transcript of the conversation in the case study. A copy of the audio-recording is available for classroom adoption and/or personal purchase by contacting: Wayne A. Beach, School of Communication, San Diego State University, San Diego, CA 92182-4516.

"Conversations About Illness presents a compelling human drama....It offers a living lesson in how family members can struggle lovingly, asserting contrasting positions and willingly engaging in conflict. Beach's superb analysis invites increased reader appreciation for the details of this, and all, human interaction."
—Human Studies

"Throughout his book, Beach treats both parties' actions as coordinated, collaborative, and truly interactional. This is a refreshing treatment of a topic--health--which is still too often treated as individualistic and unidirectional. Conversations About Illness offers a first look in a very promising direction; in some ways, it can be seen as only beginning to scratch the analytic surface of this particular interaction, and this approach to health and illness in general."
—Language in Society